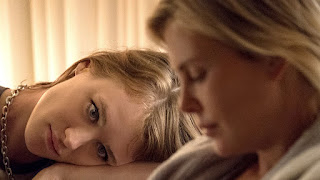 Directed by Jason Reitman and written by Diablo Cody. Starring Charlize Theron as Marlo, Mackenzie Davis as Tully, and Ron Livingston as Ron.

Like a nocturnal Mary Poppins, the young lady we know only as “Tully” comes to the aid of a mother stressed out after the birth of her third child. Marlo (Charlize Theron) has reason to be stressed: Her first child is autistic, her second child is nearing her “difficult” pre-bubescent years, and the screaming new baby needs constant attention. Chaos reigns. Marlo’s hubby (Ron Livingston) is no help. He works hard, but he’s away on business all the time and too tired at home to deliver anything but a night-time peck on the check.

Then, after the household appears to be settled and back on track, Tully persuades Marlo to share a night on the town. The ladies visit the bohemian haunts of Marlo’s pre-marital escapades. There is a key conversation between them when Tully declares she can no longer remain as the Night-Nanny. But by now Marlo has grown dependent on her. She needs her. Tully is insistent that it is time to go. Like Mary Poppins, her work is done. Marlo must now return to the “normalcy” and safe routine of her life as wife and mother. On the ride back home, Marlo falls asleep at the wheel and plunges the car off a bridge into a stream. Miraculously, she is saved and wakes up later in the hospital to the kindly face of her waiting husband.

But something odd is happening. Marlo’s husband is called into the hospital office where he is quizzed about her psychiatric problems. Problems? At first, puzzled, he then admits yes, his wife has suffered exhaustion recently. All the while, Marlo is experiencing a delirium dream, a vision in which a mermaid-like figure swims down toward the sunken car and releases her from the confining seat belt. She swims to safety.

Strange, yes. Indeed, there has been something decidedly strange about this movie from the very beginning. It’s only upon nearing the end of the film when it is casually noted that Marlo’s maiden was Tully. Tully... Of a sudden, all the tumblers of a locked safe move into position and the door flies open: Tully has not existed to anyone save Marlo. Tully is Marlo. That is, Marlo’s pre-marital self. The self that had been locked away and lain dormant for too long. Think back to the careful staging of every scene with her and Marlo together and we realize Tully never interacts with anyone save Marlo.

It’s fascinating to realize how an extraordinary, outre fantasy has been deployed in the restoration of normalcy. The miracle hasn’t blown open the doors off reality, it has closed them tightly. Mary Poppins didn’t fly away. She landed back on our doorstep.