THE BIRTH OF A NATION 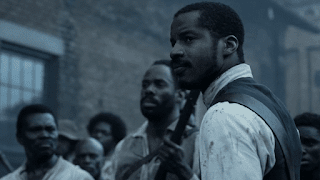 Written, directed, and starring Nate Parker as Nat Turner, Armie Hammer as his master, and Aja Naomi King as his wife.

The time is 1831. Turner is a literate slave and preacher on a Virginia plantation who led a 48-hour slave rebellion that resulted in the deaths of more than 50 slave holders. He was captured and hanged, along with more than fifty slaves. What little we know of his story comes from the publication in 1831 of The Confessions of Nat Turner, the Leader of the Late Insurrection in Southampton, Virginia, by a white lawyer named Thomas R. Gray. In 1861 the white abolitionist Thomas Wentworth Higginson published an essay entitled Nat Turner’s Insurrection. A century later, in 1865, William Styron published his controversial, Pulitzer Prize-winning The Confessions of Nat Turner. Initial attempts by Hollywood to adapt it to the screen were blocked by Black Anti-Defamation Association, a group of African-American actors.

Turner’s motives have been regarded, by turns, as political, religious, and personal, the latter hinging on his vengeance for his wife’s brutal rape by local slave masters. Now, in Nate Parker’s new film, there is a decided emphasis on Turner’s bloody vengeance for the brutalization of his wife. There is even a scene where she gives him permission to avenge her rape. With Biblical fire and brimstone—“For every verse they use to support our bondage, there’s another one demanding our freedom”—he hastily arms his followers and leads them into battle against the slave holders. There is carnage on both sides. To the strains on the soundtrack of the song, “Hanging Fruit,” a dozen slaves are hoisted into the trees, where they are hanged by the neck. Turner’s execution quickly follows.

As beautifully shot and edited as is this film, I must admit that at moments like the “Hanging Fruit” scene, I began to squirm. Moments of subtlety that had heretofore been present were subverted by heavy-handed sermonizing. Moreover, I had been trying to resist a growing awareness that Parker was loading up Turner’s story with images of spiritual transcendence and ecstasy. Turner’s insurrection is here fraught with Jesus metaphors of martyrdom: Blood flows from an ear of corn. At crucial moments, heavenly rays outline Turner’s body. An angelic figure, wings and all, appears to him at the moment of his death. A murmuring, churchly chorus surrounds the moment. The benevolent Turner has become a holy warrior.

To what degree this dilute the political contexts of Turner’s story is a matter for debate. I for one, regretted the concession to Cecil B. DeMille’s brand of Hollywood religious hooha. There is no gainsaying Parker’s fervor and his admirably restrained performance as Turner. But I got the impression that the political and social contexts of a story about revolt and freedom were sacrificed to a more simplistic revenge story. As critic SalamischahTillet writes in the New York Times, “In a film about coming to terms with the nation’s founding sin of slavery. . . the representations of rape here feel eerily retrograde.” In an appended note, the critic observes that The Birth of a Nation is “out of step with the cause it has often been associated with, Black Lives Matter, which has steadfastly resisted the model of a single charismatic male leader and has primarily been led by African-American women.”

If you want to check out a film that bears more than a little resemblance to this, but which chronicles its true story with no concessions to spiritual eyewash, see Fred Schepisi’s wholly admirable The Chant of Jimmie Blacksmith, the Australian story of a 19th-century indigenous slave’s bloody revolt against his masters.
Posted by John C. Tibbetts at 8:25 AM No comments:

THE GIRL ON THE TRAIN 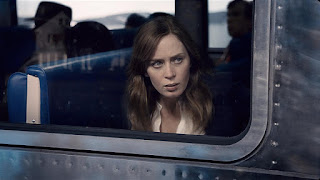 Directed by Tate Taylor and starring Emily Blunt as Rachel, adapted from the novel by Paula Hawkins.

It doesn’t take long for THE GIRL ON THE TRAIN to derail. Not the train; it survived. No, the titular “Girl” and the Story itself. I recall my frustrated attempts to read the novel a couple of years ago. I think it was not quite halfway through that I literally threw the damned thing against the wall. Or was it out the window of a train? I really don’t remember. The convoluted plot, the arbitrarily contrived intersections of the characters—three narrators, no less—and the baffling dislocated narrative line left me profoundly disinterested and, frankly, pissed off. It’s as if director Tate Taylor decided he was going to outgun the French master, Alain Renais in drowning the hapless viewer in a swamp of confusion. Actually, he succeeded. Resnais’s masterpiece, MURIEL, has nothing on THE GIRL ON THE TRAIN.

How happy I am to see that Anthony Lane’s review in The New Yorker agrees with me: “Half the sentient beings on earth appear to have read the book,” Lane writes, “alleging with near-unanimity that they couldn’t put it down. I couldn’t pick it up. I tried.” He goes on to note the drab mediocrity of it all: “The tale is set largely in a suburb on the Hudson, and nothing is duller or more stifling, as a rule, than people who wish to make it perfectly plain how stifled they feel by their dull suburban existence.”

I defy you to hang with me as I try to work out the plot. Rachel used to be married to Tom. But Tom had an affair with Anna, and is now married to her. They have a baby. They also have a nanny named Megan. Megan looks a lot like Anna. Megan is living with a creepy guy named Scott. She is also hot for her shrink, Kamal. Rachel is also seeing Kamal. Meanwhile, during one of her train rides up the Hudson, Rachel spots suspicious activity on the balcony where Tom and Anna live. Is the girl in the clinch Megan? Is it Anna? And is her squeeze Scott, or Tom, or Kamal?

Who gives a damn?

And did I mention that Rachel is so spaced out psychologically and so drunk throughout that she can’t figure out anything? Never mind, she will soon commit murder. But no, it is Anna—or is it Megan?—who does the deed.

I have to admit Emily Blunt is very brave taking on the role of the drunk and wobbly and spaced out Rachel. The bombshell that years ago graced THE DEVIL WEARS PRADA is here a dour, bleary wreck.

During your next train trip, I suggest you pick up a less convoluted, bewildering book, say, THE SPOILS OF POYNTON, by Henry James.
Posted by John C. Tibbetts at 5:21 AM No comments: