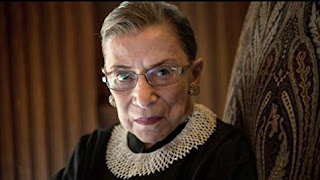 “The Notorious RBG” is emblazoned on tee-shirts across the country. And amidst the current crop of super heroes on screen, Variety magazine trumpeted about this modest little documentary: “How Ruth Bader Ginsburg Became a Summer Box Office Avenger.”

Wow, do we need this story of the 84-year old Little Woman That Could! Judging from the enthusiastic response of the packed house at the Tivoli Theater, it’s striking a nerve with hammer blows that put Thor’s hammer to shame.

The narrative strategy of RBG is standard-issue: We have a profusion of film clips and photos from Ruth’s childhood, her education at Harvard and Columbia, her remarkable string of Supreme Court victories in the 1970s, her rise to the Supreme Court in 1993 , her subsequent fame as the Great Dissenter in favor of women’s issues cases, her current status as Guru to a new generation of women and liberals, and numerous encomiums from Gloria Steinem, Nina Totenberg, and other women on the Front Line. And speaking of Women on the Front Line, there’s a breathtaking citation of a quote from 19th-century abolitionist Sarah Grimke: “I ASK NO FAVOR FOR MY SEX; ALL I ASK OF OUR BRETHREN IS THAT THEY WILL TAKE THEIR FEET FROM OFF OUR NECKS.” On a more personal level, Ginsburg is revealed to be an opera lover (a few choice bits from Lucia de Lammermoor), a proponent of physical fitness, and an educator.

This last provides one of the funniest moments in the film: She describes her days in the ‘70s arguing before the Supreme Court as a “kindergarten teacher” before an all-male court teaching the realities of women’s issues.

Most moving of all are the glimpses we get of her relationship with her beloved husband of more than 45 years, Marty Ginsburg, who died in 2010. He is the Man Behind the Throne, so to speak, whose love, support and advocacy of his spouse paid no little role in her career.

Through it all, the quiet-spoken RBG is a Sphinx with a twinkle in the eye and a gentle jibe at the ready.

Female filmgoers will support the film. But it is the men who must also go, watch, and be educated.

Meanwhile, there has been some talk that female viewers attracted to the current Book Club will flock to RBG. What a stupid expectation that is. Viewers of RBG will likely consign Book Club to the Graveyard of Misbegotten Movies. The only possible connection between the two films is that one of the women in Book Club has a cat named “Ginsburg.”