Dalton Trumbo’s finest hour, in my opinion, was his work on the script for the science-fiction classic, Rocketship X-M (1950). The fact that he is uncredited on this sadly-underrated progenitor of the post-war cycle of SF films is all to the point: For one thing, it was one of his first projects since his release from prison and immediate confinement to another sort of prison—the Hollywood Blacklist; for another, it was a B-movie that for many years was all but eclipsed by its A-list contemporary, the more prestigious, but bloated, entry, Destination Moon; and finally, it was his work on Kurt Neumann’s script that transformed Rocketship X-M from being a routine monster movie (the dinosaurs on the planet Mars just had to go) to one of post-war America’s first warnings against nuclear holocaust.

Alas, his work on RXM is just one of many critical details that the new film, Trumbo, ignores.

Trumbo is not likely to compete with two other Hollywood films that have bravely depicted the spotlight on its own role in the Blacklist years of the 1950s (Guilty by Suspicion, Irwin Winkler, 1991) and the television industry (The Front, Martin Ritt, 1976). The latter is especially noteworthy in that many members of its cast and filmmakers were themselves blacklisted. But it does give a face to one of its most notorious screenwriters, Dalton Trumbo. I say “notorious” because it was Trumbo, along with other hostile witnesses before HUAC (1938-1975), notably John Howard Lawson, who mistakenly thought it best to instruct J. Parnell Thomas and his minions (including Richard Nixon) on the Constitution and the First Amendment. To say Trumbo’s arch and sneering manner and Lawson’s shouting hostiity shot themselves in the foot, further antagonizing HUAC and hastening their own imprisonment is debatable. But there’s no doubt they didn’t help their cause.

So now we have the able Bryan Cranston as Trumbo, and a gaggle of lame look-alikes as Hollywood figures caught up in the Blacklist maelstrom—L.B. Mayer, Edward G. Robinson, John Wayne, Hedda Hopper, Kirk Douglas, Otto Preminger—stepping to the fore, enacting a quick survey of the years 1947-1960, from the first testimonies by the Hollywood Ten, to the years of the blacklist in the 1950s, and Trumbo’s eventual exoneration as the credited screenwriter of such classic films as Roman Holiday, The Brave One, Spartacus, and Exodus. The film skips across critical moments in that period like a stone across the water. It’s all pretty much by the book, although, regrettably, some of the most salient issues are neglected in favor of Trumbo’s strained family life during his years in exile.

Missing here, for example, are HUAC’s particular focus on the Hollywood Screenwriters Guild; the ludicrous accusations delivered against “Red-Friendly” films like Mission to Moscow, North Star, Tender Comrade; reasons why Hollywood was a “hot-bed” of liberal politics and alleged Communist activity; the backlash of anti-Communist films that quickly appeared (Big Jim McLain, I Was a Communist for the FBI, My Son John); Trumbo’s work during the post-Blacklist period (Lonely Are the Brave, Johnny Got his Gun); and, for some reason, details about Trumbo’s own involvement in the Party (his resignation came a year or so before his testimony). Younger viewers viewing these events might be understandably puzzled about just what the hoo-ha was all about. 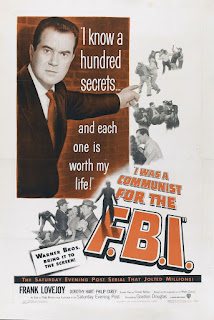 Most egregious, perhaps, is the lack of context for L. B. Mayer’s issuing of the infamous “Waldorf Statement,” which presented a united front from the top Hollywood producers in support of the Blacklist. All we know from Trumbo is that Hedda Hopper single-handedly cowed L.B. Mayer into it. And completely absent is a similar statement from Eric Johnston of the MPPDA. Now, “Hedda from Hell” was a formidable gossip-monger, but this is the first indication I’ve seen that she was its true instigator.

The roll call of Trumbo’s films before the Blacklist is, ironically, inferior to those subsequently written, either under “front” bylines or his own name before his death in 1976. Can A guy Named Joe, Kitty Foyle, 30 Seconds Over Tokyo, and Tender Comrade compare with the later, superior Gun Crazy, The Prowler (1951), Lonely Are the Brave (1962)—and, of course Spartacus?

Or, for that matter, Rocketship X-M, which, except for an article I wrote a few years ago, has yet to be officially acknowledged.[1]