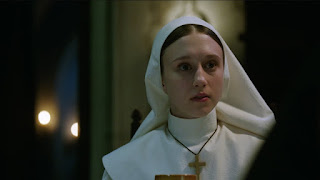 TOO MANY SPOOKS SPOIL THE BROTH

That’s a maxim that too few horror movies observe. THE NUN has too darned many nuns. There are nuns to the left of us, nuns to the right of nuns, they volley and thunder. . . All apologies to Alfred Tennyson.

All we’re missing are a few clowns! A reasonable expectation. What is it about clowns and nuns that creates such unease in us? It’s not enough that both wear costumes and enact rituals. No, we wonder if our reactions to clowns and nuns alike are rooted in some pre-historical fear, some disturbance in the human genome past understanding? I bet that somewhere in the mists of dawn, there was a cave where a clown capered and a nun prayed? Small wonder that one of the writers of THE NUN, Gary Dauberman, also worked on the ultimate clown movie, It.

You recall there were fleeting images of a ghastly nun that appeared in the other “Conjuring” movies. Now, in THE NUN, a deranged Holy Mother—that is, an Unholy Mother—gets a film all her own. And boy, does she “holy roll”! The setting is a Romanian abbey in 1952, where nuns have the uncomfortable, er, “habit,” of hanging themselves from the nearest stained-glass window. Somebody must have seen the epic Powell and Pressburger classic, Black Narcissus. So, the Vatican, which in 1952, had yet to wrestle with demons of its own, dispatches an exorcising priest and a nun novitiate who sees visions to the site. And such a sight it is. It’s a structure riddled with passages and subterranean vaults. One of those vaults functions like a plug that holds back an infernal creature that for centuries has been trying to break through and destroy the world. Hey, give a demon at least an “A” for effort!

So as long as the nuns pray, the hellish beast remains shackled. But by the time our intrepid ghost busters arrive, the Evil One has grown impatient and is about to bust loose.

Some of the nuns are for real. Some are not. The fact that it’s difficult to distinguish one from the other is, somehow, the whole existential point.

By the time we viewers crawl out of the theater, anxious to bust loose like the Evil One from His cell, we have grown tired of the endlessly repetitive shock tactics. Every moment Something jumped out of the Gothic Jack-in-the-Box. And all the while, the soundtrack growls, moans, and bursts into deranged mashups of medieval chants. Maybe worst of all, the damned movie is TOO DARK. I bet 95 percent of the thing is cloaked in a cheap chiaroscuro that Caravaggio would have disowned. I’m not sure if it’s a good thing that this cloaking darkness ABETS the sense of dread, or if it’s just a good thing that it prevents us from SEEING anything. Hey, be grateful for small favors.

Let me just add, in closing, that Crucifixes and Holy Water and even a vial containing the blood of Jesus Christ prove ineffective deterrents against Evil. Think about that a minute.

THE NUN is indeed a film For Our Time. Where everything these days is upside down—even the Cross.

Posted by John C. Tibbetts at 8:11 AM No comments: 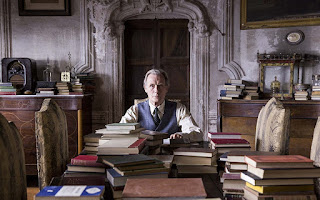 Directed by Isobel Coixet and starring Emily Mortimer as Florence Green, Patricia Clarkson as Violet Gamart, and Bill Nighy as Mr. Brundish. Based on the 1978 novel by Penelope Fitzgerald.

It’s a pity that old Mr. Brundish will never get to read Ray Bradbury’s Dandelion Wine. Thanks to Florence Green’s book shop, and her recommendations, he’s already read Fahrenheit 451 and is ready for more. But Mr. Brundish dies before he can turn a page. Moreover, the book shop itself perishes in the flames of a fire. And the picturesque little seaside village can only limp along without it.

Mr. Brundish’s tragedy is the tragedy of this film in microcosm. Indeed, it’s the tragedy of literacy these days; and I’m writing this on the very day that the demise of The Village Voice has been announced.

All the elements of a small English village idyll are here: The East Anglia town is the very picture of a rustic fable. The villagers are the usual collection of types—the crusty old curmudgeon who lives on the hill, the social matriarch who controls society, the young widow who comes to town as a stranger bent on winning over the inhabitants, and the clever little girl who learns to love books. But leave your expectations at the door. THE BOOK SHOP is so much more than that. THE BOOK SHOP is so much better than that. Although I can sympathize, I guess, with those disgruntled viewers who will leave the movie theater with a sour taste in their mouths. They want muffins, tea cozies, and a view of the sea. And this is largely denied them.

Let’s get this straight: THE BOOK SHOP is a devastating indictment of insular small-town life. And it’s emblematic of the crisis loyal book readers are facing today. Penelope Fitzgerald’s novel was written in 1978, and she certainly could see what was to come.

No sooner has Florence Green (Emily Mortimer) come to town to open her book shop than the city elders take deadly aim. The banker is dubious. The neighbors are chilly. And Violet Gamart (Patricia Clarkson) is a study in pure evil: Under the feint of seizing the store’s property in order to open an Arts Center, she’s simply bent on destroying Florence’s dream. Clarkson’s quiet and studied portrayal is calculated to leave you writhing in fury. Aligned in Florence’s corner is that crusty old hermit on the hill. And here we have Bill Nighy in a brilliantly restrained portrayal of an old man who’s finding out too late what love can be all about. He dies while on an errand to save Florence’s shop from destruction. And if you thought that Violet’s evil gnashes your teeth, prepare yourself for the rage that will shake your dentures with what happens to him. And if you love Dandelion Wine like I do, then you are overwhelmed at the book that will remain unread by his side.

But there is a book that will be read. And that is Robert Hughes’ masterpiece, The Innocent Voyage. (Here, it bears its alternate title, A High Wind in Jamaica, the title with which Alexander Mackendrick’s film adaptation reached the movie screen in 1965). This is the book that Florence Green gives the little girl, Christine (Honor Kneaf), who has been working for her in the book shop. And in case you don’t know, this is the book that turns the tables on the Stevensonian kind of pirate yarn: Here, it’s the children who are destructive and the pirates who are their captives. Anyway, taking her cue from the book, little Christine salutes Florence Green by burning up the book shop in a gesture of defiance, depriving wicked Violet Gamart from getting her greedy hands on it. The voice on the soundtrack turns out to be her voice, looking back from the distance of fifty years on the book shop that changed her life.

THE BOOK SHOP is a painful blend of stark village depravity with a winning, fable-like quality. The scenes between Emily Mortimer and Bill Nighy are the finest, albeit chaste, love scenes this writer has seen in years.

Honor this movie. Celebrate it for all its bumps in the road. And, by all means, read Dandelion Wine and A High Wind in Jamaica.

Posted by John C. Tibbetts at 3:10 PM No comments: