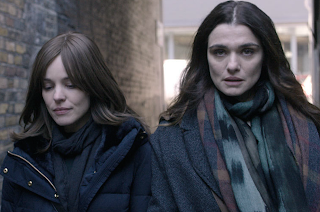 Rabbi Rav’s last sermon strikes the discordant note that reverberates throughout the rest of the new film, DISOBEDIENCE. “God has created the angels,” he declaims, “who can only follow their blessed gifts; and the beasts, who can only follow their earthly instincts; and there are we humans, in between, neither one nor the other, but who must choose... “ Thereupon the rabbi is stricken with a heart attack and collapses, dead, on the spot.

Those words will be repeated near the end of the movie by the rabbi’s successor, Dovid Kuperman. But at those fateful words, “you must choose,” he suffers an insight; and that revelation allows him two choices: The first is to resign his appointment; and the second is to free his wife from her obligations by marriages.

Both are stunning admissions in this rigidly patriarchal Jewish community. In between those two scenes is a drama of love and faith that are severely tested. The late rabbi’s daughter, Ronit Krushka, has left her New York home to return to her family community in London. She seeks forgiveness for leaving her father and the faith decades before. As a youth she had formed a passionate attachment to Esti Kuperman, which had shocked the heterosexual tenets of the faith. And now, back in London, that attachment rekindles. Complicating an already tense situation, Esti is the wife of the rabbi-to-be, Dovid.

Immediately, as the sexual tension grows between the two women, the community is outraged. Esti resolves to leave her husband and go back to New York with Ronit. Dovid himself is placed in an untenable position: He is expected to succeed the late rabbi; moreover, Esti announces she is pregnant with the child they had hoped to have.

Before the resolutions come at the end—they are not as simplistic as it would seem—we have an absorbing drama highlighted by the strong intensity of the performances by the three principles. The London streets and houses of the Jewish community are entirely convincing, i.e., there is not one moment we feel we are watching studio; rather, this is a place that is lived in, where people really do work, raise families, and worship. And the music score by Matthew Herbert is a wholly engaging, subtle, yet piquant complement to the action.

In other words, the choices by the filmmakers, cast, and crew, are wonderfully right and work together to convey a beautiful experience. Here is a movie that is really about something, an always welcome event to some of us moviegoers exasperated and dismayed by much of what else we see on the screen these days.