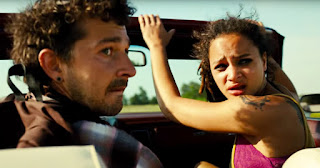 The final images of AMERICAN HONEY sum up the lives of this gypsy-like tribe of teenagers on the road. Amidst the rising flames of a twilight campfire, the kids—teenagers mostly, a few in their 20s—twist and somersault over the fire. Sparks fly upward, framing their celebration of the moment. They dance free of the blaze, while they court its destruction. This is no coming-of-age narrative. It’s only ongoing. It’s a vision of America, of a sweetly violent apocalypse consuming itself. And all the while Lady Antebellum’s song, “American Honey,” proclaims an elegy:


There's a wild, wild whisper
Blowin' in the wind
Callin' out my name like a long lost friend
Oh I miss those days as the years go by
Oh nothing's sweeter than summertime

“There’s only one rule to selling,” Jake explains to his new friend/ protégée, Star. They’re knocking on the door of a home in wealthy Mission Hills, Kansas City. “And that’s the first moment they open the door. Everything depends on that first moment. They look at you and you have to know right away who they want you to be.”

What are they selling? Whatever their “customer” wants. . .

We first see Star digging through a dumpster, tossing a turkey down to her little brother and sister. A flurry of incidents quickly follows: one moment she’s trying to hitch a ride; the next, she catches the eye of a guy in a van full of kids; then she’s dancing with a strange man in a home; now she’s chucking her clothes out the window; at a dance hall she leaves her brother and sister behind with her mother out on the dance floor; and now she’s back in a Motel 6 where she joins the van full of kids, bound for Kansas City, where they’ll team up to knock on doors and sell their wares. Life is like that in this American road trip, a series of chance encounters, rambles, casual acquaintances, and knocks on the next door.

In charge is a young woman named Krystal. She plans their motel stops, delivers pep talks, collects a percentage of the money, and enjoys casual sex with a series of strangers who mysteriously appear in her rooms. Okay, she seems to be in charge; but who is really pulling the strings of these kids? What is this selling operation really all about? We don’t know. This is no Death of a Salesman, with its Shakespearan resonance and tragic finality.

The passing scene westward, through Kansas, Oklahoma, and the Dakotas, is mostly glimpsed through the van’s windows: from the luxurious homes of Mission Hills to the dusty back roads, gas stations, seedy motels, strip malls, oil fields, and shanty shacks. The kids rattling away in their van have no past and no future. Neither does the aimless, wasted lives they see on the road. And certainly not in the country that is their America. At the center of it all is Star. She is part of the group, yet she stands slightly apart from it. She seems naïve at times but sexually experienced at others. She is neither victim nor victimizer. She makes love with Jake, she parts from Jake; again and again. She objects to selling door-to-door, yet she sells her body to a passing trucker. Periodically, she pauses to rescue a beetle, a turtle, watching their escape. But there’s no escape for her as she clings to the huddled bodies in the van, belonging, yet not belonging, as it hurtles on and on...

The film itself is like all of this, with its odd gaps in the narrative, characters who come and go, incidents that don’t resolve, and a repetitive quality that risks monotony. It’s overlong at more than two and a half hours, and frequently baffling in its narrative sense. . . Yet, and yet, there is an extraordinary sense of being in the moment throughout. There scarcely seems to be a camera anywhere. You don’t sense any of this is calculated or contrived. The surface is absolutely naturalistic and unstudied. There is a remarkable sense of life in the raw, with all its loose ends and frayed edges.
Posted by John C. Tibbetts at 12:42 PM No comments: