THE WATER DIVINER and GALLIPOLI 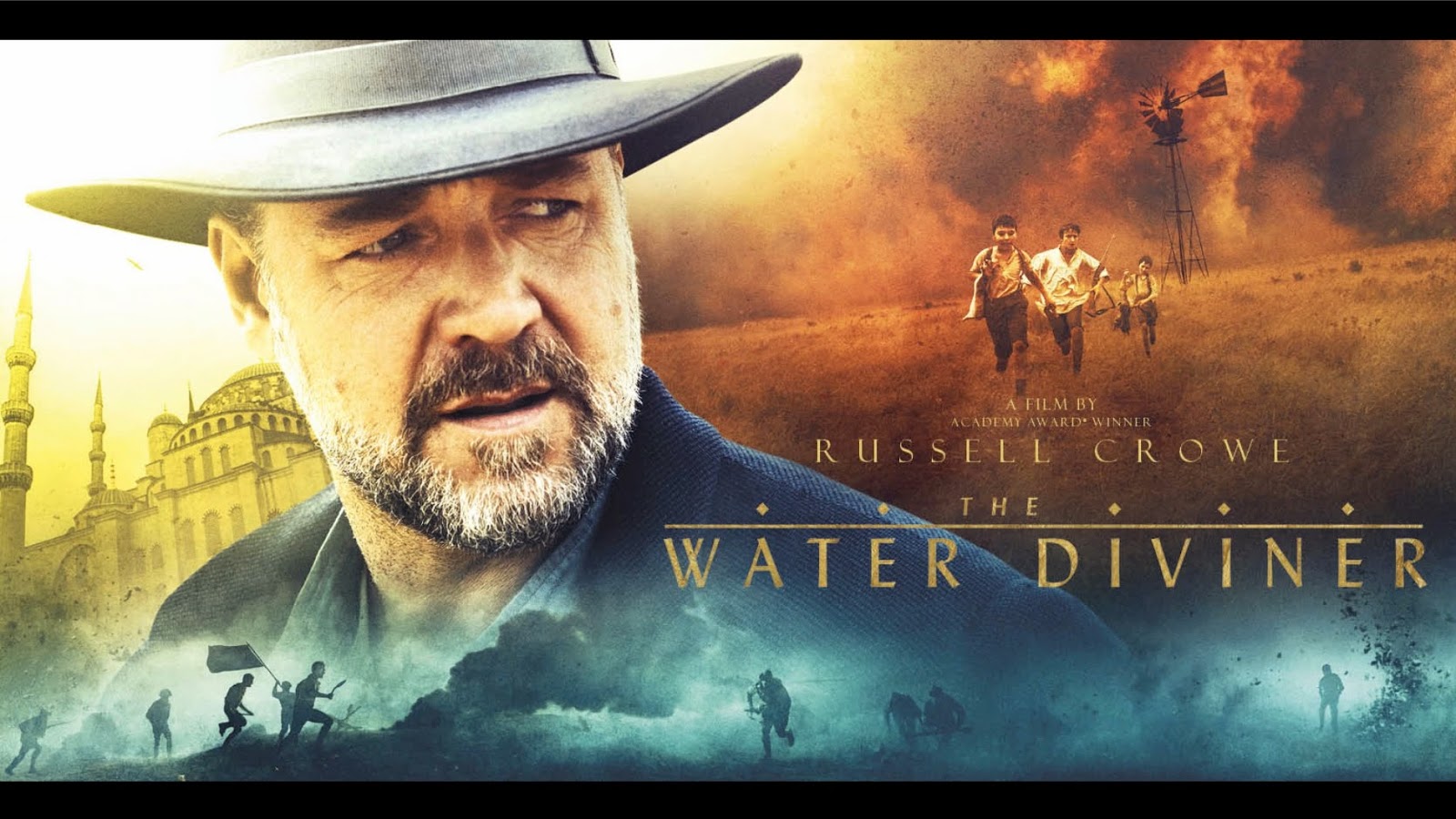 THE WATER DIVINER is only the third major Australian film of modern times that I know of which is concerned with the Gallipoli Campaign, the Allies’s disastrous attempt to wrest control of the Dardenelles from the Turks in the spring and summer of 1915. Like Ken Hannam’s BREAK OF DAY (1976), but unlike Peter Weir’s GALLIPOLI (1981), Russell Crowe’s directorial debut is more concerned with the aftermath of Gallipoli rather than the battle itself (save a handful of graphically visceral flashbacks).


Crowe begins and ends his film in two water rituals. In the first, he emerges from a newly-discovered underground spring in a scene symbolizing a kind of birth, in this case a determination to locate the remains of his three sons on the battlefield and return them to the “hallowed ground” of his Australian ranch; in the second, he descends into an underground waterway that carries him to safety from the strife that continues after the war to engulf Greek and Turkish soldiers during the partitioning of the Ottoman Empire.

In between are a series of improbable adventures that results in his discovery that a third son is indeed still alive. Yes, improbable. Crowe isn’t very adept at juggling an action adventure with an otherwise contemplative memorialization of a battlefield tragedy that saw hundreds of thousands of losses on both Allied and Turkish sides.

But at its best, we have Crowe’s understated performance and his scenes with the Turkish major (Yilmaz Erdogan), who once was his enemy and is now his comrade in arms.

As I watched, I couldn’t help but recall Peter Weir’s film, which rightly emphasizes the tragic and wholly unnecessary sacrifice of thousands of Australian and New Zealand soldiers (the Anzacs) in a doomed climactic charge in April 1915.

Permit me to cite my book, PETER WEIR: INTERVIEWS (2014), which contains, in addition to interviews with Weir about GALLIPOLI, the full text of a moving speech he gave on Anzac Day on 26 April 2001 in Washington, D.C. (Quoted with Weir’s permission)


Subtitled EX MACHINA, Alex Garland’s new movie, “R.U.R. (IF YOU THINK YOU ARE”). Forgive the play on words combining the title of Karel Capek’s 1920 play (see below) and the title of a play by Luigi Pirandello. In all these cases, how we define what is human is at issue. In the latter instance, the results are highly ironic. 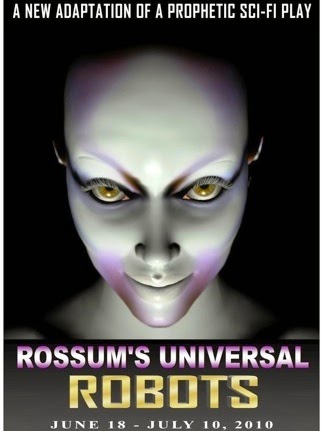 EX MACHINA tells the story of a computer coder, Caleb (Domhnall Gleeson), who spends a week at the mountain home of Nathan (Oscar Isaac), a brilliant scientist who is seeking the “next step” in artificial intelligence. Caleb will observe Nathan’s newest “experiment,” a sleek, beautiful, and wholly lifelike android/robot called “Ava” (Alicia Vikander) and determine if “she” represents a breakthrough in the creation of a truly “human” creature. If Ava “fails” her test, Nathan will deprogram her and begin anew with a more advanced prototype. Indeed, we eventually learn that he has already created—and discarded—a closetful of female prototypes. Will Ava be next?

Ironically—and dare I suggest there is a sexist twinge to this—the movie demonstrates that it is in Ava’s devious exploitation of her “feminine” wiles that she is finally able to prove she is truly human.

What was more interesting for me were EX MACHINA’s wittily subtle contrasts and interfaces of human and mechanical intelligence: For example, the lyric murmurs of Schubert’s B-flat Piano Sonata are piped through the empty, sterile confines of Nathan’s home. Outside those neutral-gray rooms gushes a spectacular waterfall and granitic cliffs. And on Nathan’s otherwise empty wall space is a large canvas by Jackson Pollock. “Pollock could not have painted that,” says Nathan, “if he had calculated in advance each brush strike and dribble of paint.” In other words, the “human element” resides not so much in calculation but in randomness, accidents, and unpredictability. 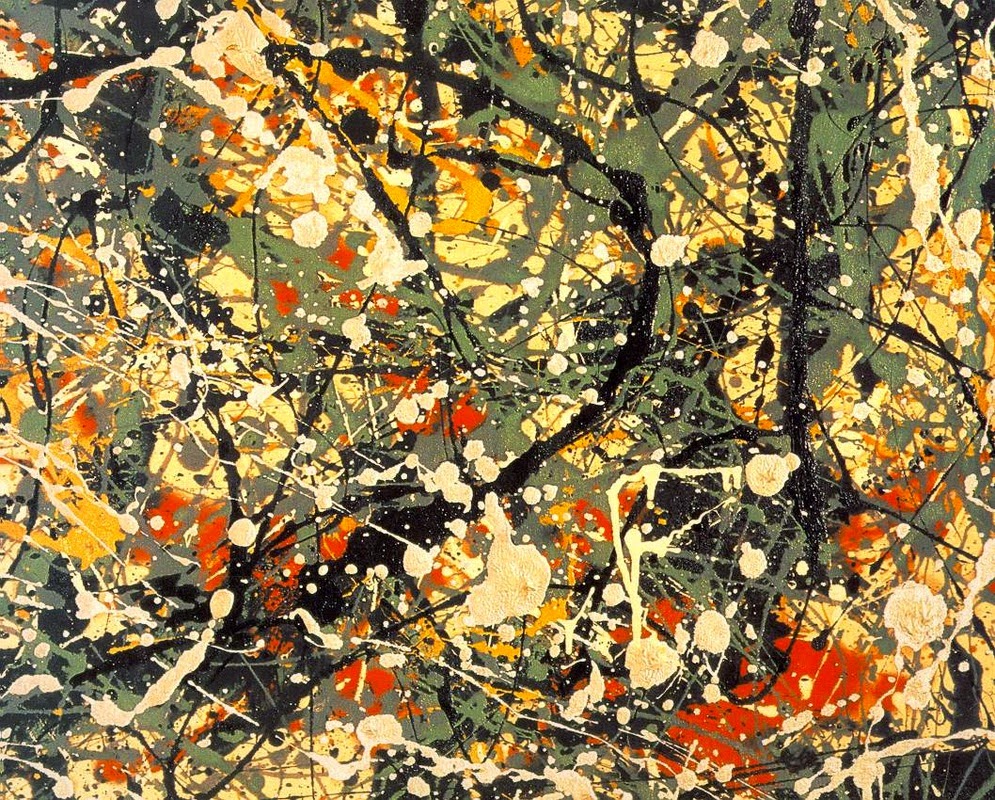 Maybe, inadvertently, Nathan has unleashed his own version of a Pollock painting. His calculated experimentation notwithstanding, Ava will prove to be truly human only when she betrays and kills those around her. Survival is everything.

To be human is pretty risky business.

Posted by John C. Tibbetts at 8:12 AM No comments:

My recent viewing of SEYMOUR: AN INTRODUCTION, the new film documentary by Ethan Hawke, has struck all manner of resonances within me about two great pianists, the titular Mr. Bernstein, and the late Claude Frank (1925-2014), pictured below with me at the University of Kansas. 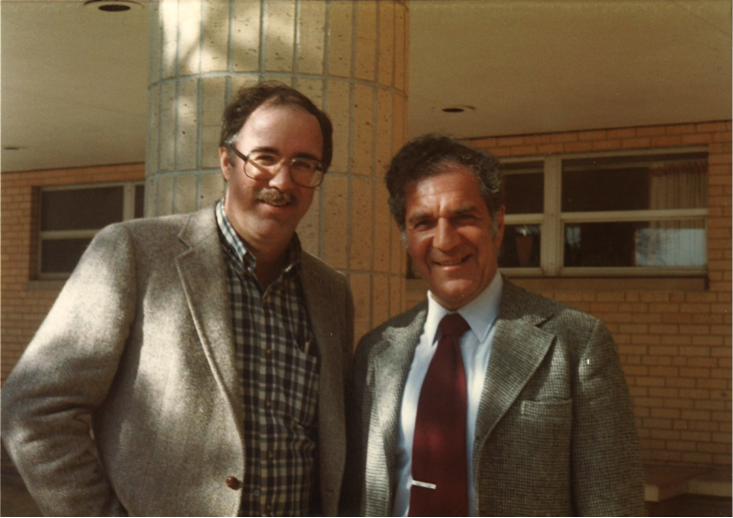 Hawke’s informal portrait of the noted concert pianist/ educator Seymour Bernstein touches a lot of bases (or, piano keys!), namely the biography of a New York-born artist who grew up a keyboard prodigy, survived service in Korea, studied with the eminent British pianist Clifford Curzon, garnered world fame on the concert platform, and has spent his later years teaching the craft and philosophy of art and music.

There’s plenty of piano music, of course, mostly performed by Bernstein himself, with fascinating sidelights on other pianists, notably the eccentric Canadian pianist Glenn Gould, insights into the great piano composers (notably, a passionate commentary on Robert Schumann’s great C-major Fantasie), a tour of the legendary Steinway basement during a piano selection, and peeks into his work with students in master classes.

Ah, yes, the master class. . . Bernstein adopts a warm, patient, and magisterial approach to his students, unlike other master classes I have attended, where somebody like Menahem Pressler is nothing short of ferociously impatient with his students. That is appreciated. But watching these sequences brought to mind my friendship with the late pianist Claude Frank (my drawing below). I first met Claude when he visited the University of Kansas in 1983 in the first of several Artist-in-Residence appearances there. Instantly, the old-world charm and wit of this master pianist—student of Artur Schnabel and master of the German school of Schubert and Beethoven and Schumann—appealed to me and everyone he met at the University. He sat down with me at the keyboard and talked about his early years in Nuremberg, his escape to America before the onset of World War II, his experiences in the American Army, his subsequent concert career, and his ground-breaking recordings and performances of the complete Beethoven Sonata Cycle. His passion for music and life infused his every word, while he generously punctuated his remarks with performance excerpts. That led to our many other encounters. He became a vital resource for my Public Radio series, The World of Robert Schumann; and just recently, I produced a radio program that featured his affectionate tribute to music in the movies, in particular, his one-man platform performance that mildly satirized the Schumann biopic, SONG OF LOVE (1947). He had allowed me to tape that performance fifteen years ago, and hearing it again now brings tears to my eyes. Claude Frank and his wife Lillian Kallir (my drawing pictured here), also a world-class pianist, frequently performed together. I vividly remember hearing them both perform a Mozart two-piano concerto. And their daughter, Pamela, has become in her own right a celebrated violinist. Here, indeed, was a family that made beautiful music together. Pamela survives both parents, and a recent performance with Emanuel Ax consolidates her position as one of the pre-eminent violinists in the world. Master classes. . . nay, MASTER MUSICIANS both, Seymour Bernstein and Claude Frank. I never met the former, alas, but my memories of the incredible generosity and engaging humor of the second, remain a special “musical tone” in my memory.

And kudos to Pamela Frank, whose career carries on the Frank legacy. 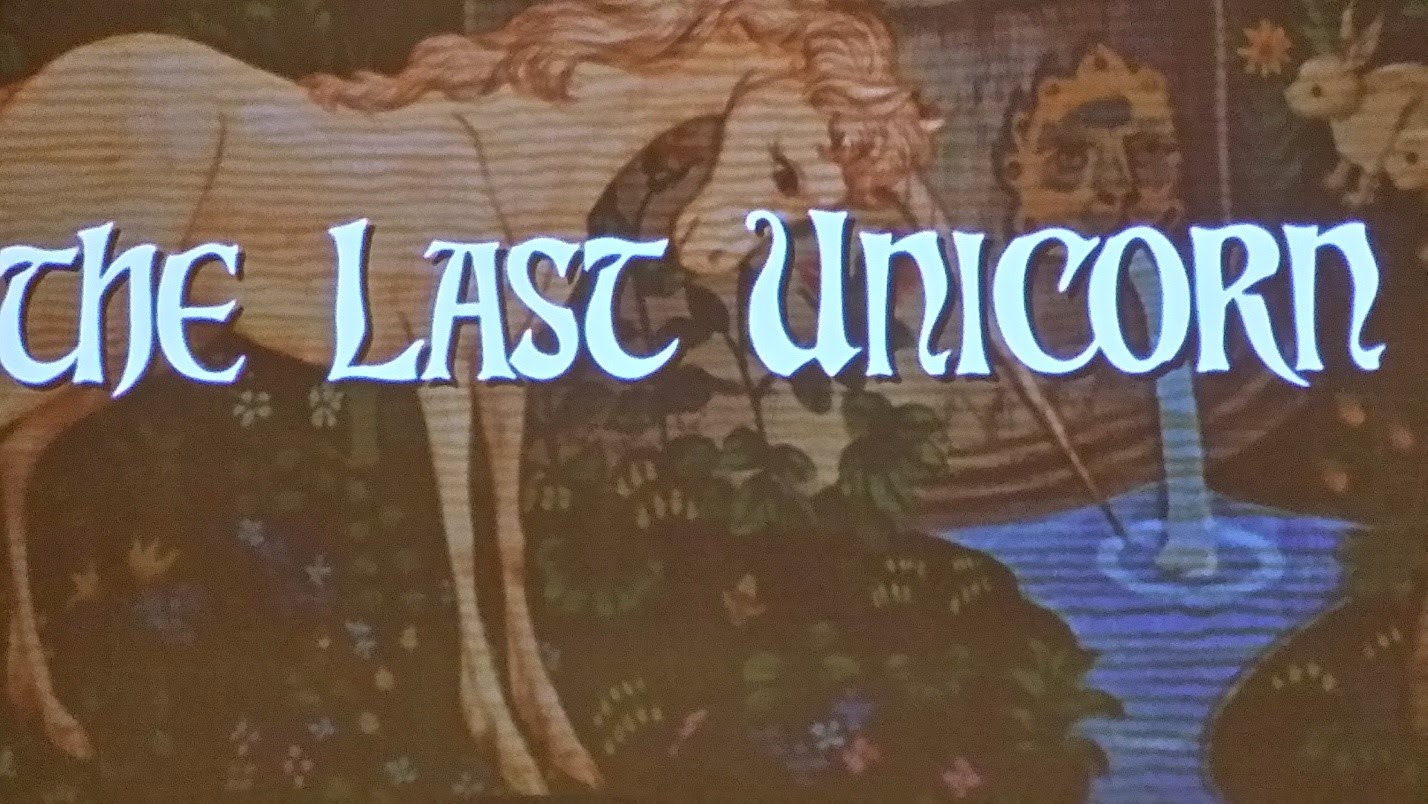 Recently I met and interviewed the esteemed fantasy writer, Peter S. Beagle. The occasion was a screening in Lawrence, KS of the 1982 film adaptation of his classic 1968 novel, The Last Unicorn.

The novel’s opening words are iconic: “The unicorn lived in a lilac wood, and she lived all alone.”

I had read the book many years ago and so am very familiar with its story of a young Magician, Schmendrick, and his friend, a Unicorn, who go on a quest to the Castle of King Haggard to find the truth of Magic and Mortality. While Magic and Mortality would seem to be mutually exclusive, as traditional fantasy has it, Beagle turns them on their heads, as it were. Here is a fairytale that ultimately celebrates the human state. The Unicorn, who is immortal, falls in love with a young knight and subsequently yearns for mortality. The apprentice Magician, like the Unicorn, is immortal, but gaining the secret of the Ultimate Magic renders him mortal: “Whatever can die is beautiful—more beautiful than a unicorn... “And what are their fates? To her regret, the Unicorn regains her immortality and spends eternity lamenting her lost love. The Magician attains his true Magic, but now finds growing old a bittersweet victory.

“We are in a fairy tale,” says Schmendrick, “and must go where it goes.” 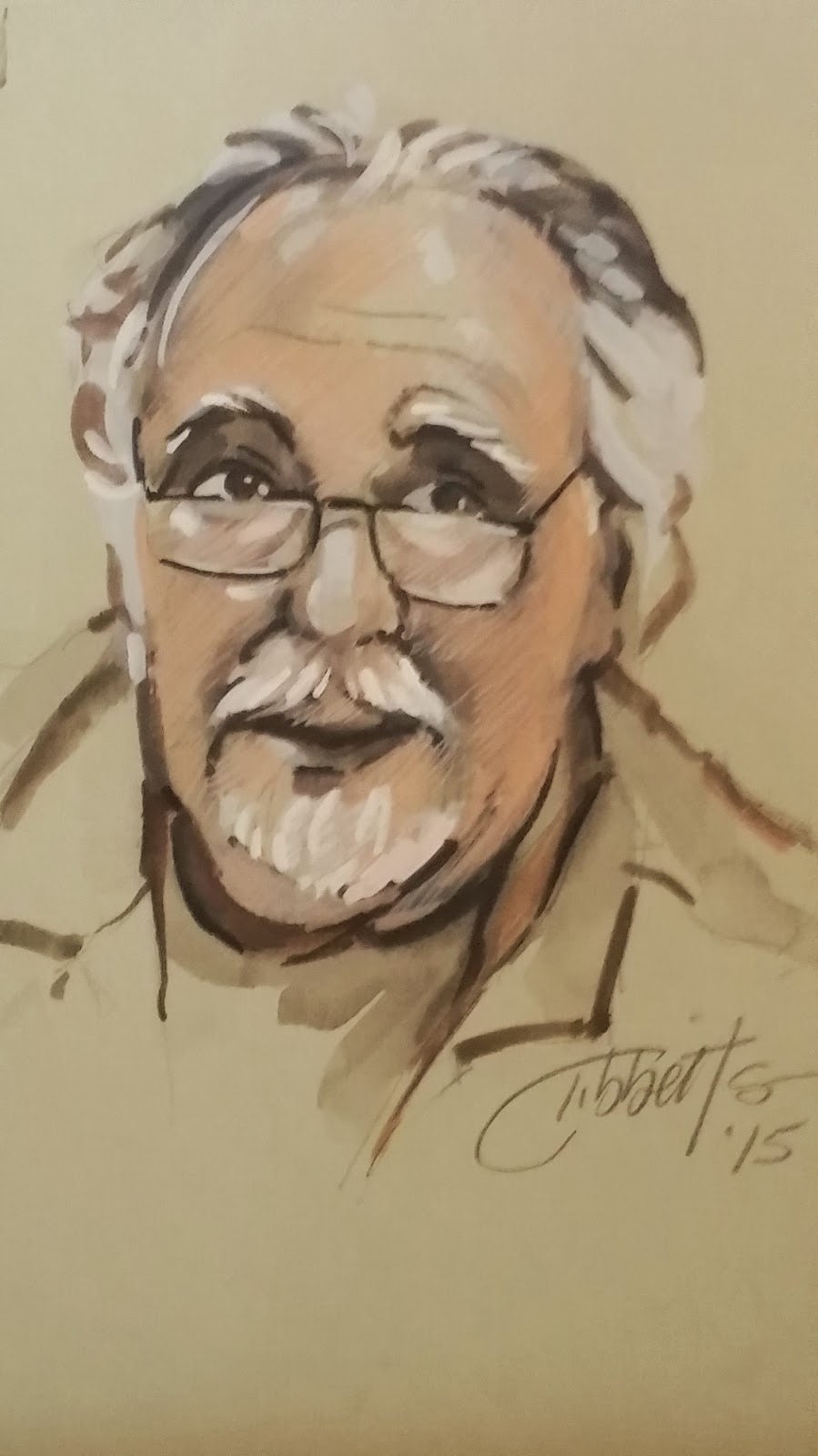 Beagle’s lyric and singing prose limns the action with a magic spell of its own. For example, the very subject of Magic, and whence come its roots and meaning, is a very tricky thing to pull off—witness Ursula Le Guin’s triumph in her wonderful Earthsea series, where Magic derives its power from the Naming of Names. The lamentable Harry Potter books, on the other hand, skirt the sources of Magic entirely. It just is, and for the most part merely the agency of parlor tricks, with an assortment of clunky wands and flying brooms.

But savor Beagle’s comments on how Magicians work: “For only to a magician is the world forever fluid, infinitely mutable and eternally new. Only he knows the secret of change, only he knows truly that all things are crouched in eagerness to becomes something else, and it is from this universal tension that he draws his power.”

There’s frequently a raffish humor spicing the words. Consider Prince Lir, who falls hopelessly in love with the Unicorn’s human form. “As a hero,” drily observes the narrator, “he understood weeping women and knew how to make them stop crying—generally you killed something!“ And I love the comic threat of this wicked Magician’s incantation: “I’ll turn you into a bad poet with dreams.”

Meeting Mr. Beagle proved to be nothing short of inspiring. He wears his erudition, wit, and charm very lightly, tucked under his own Magician’s cloak, as it were. 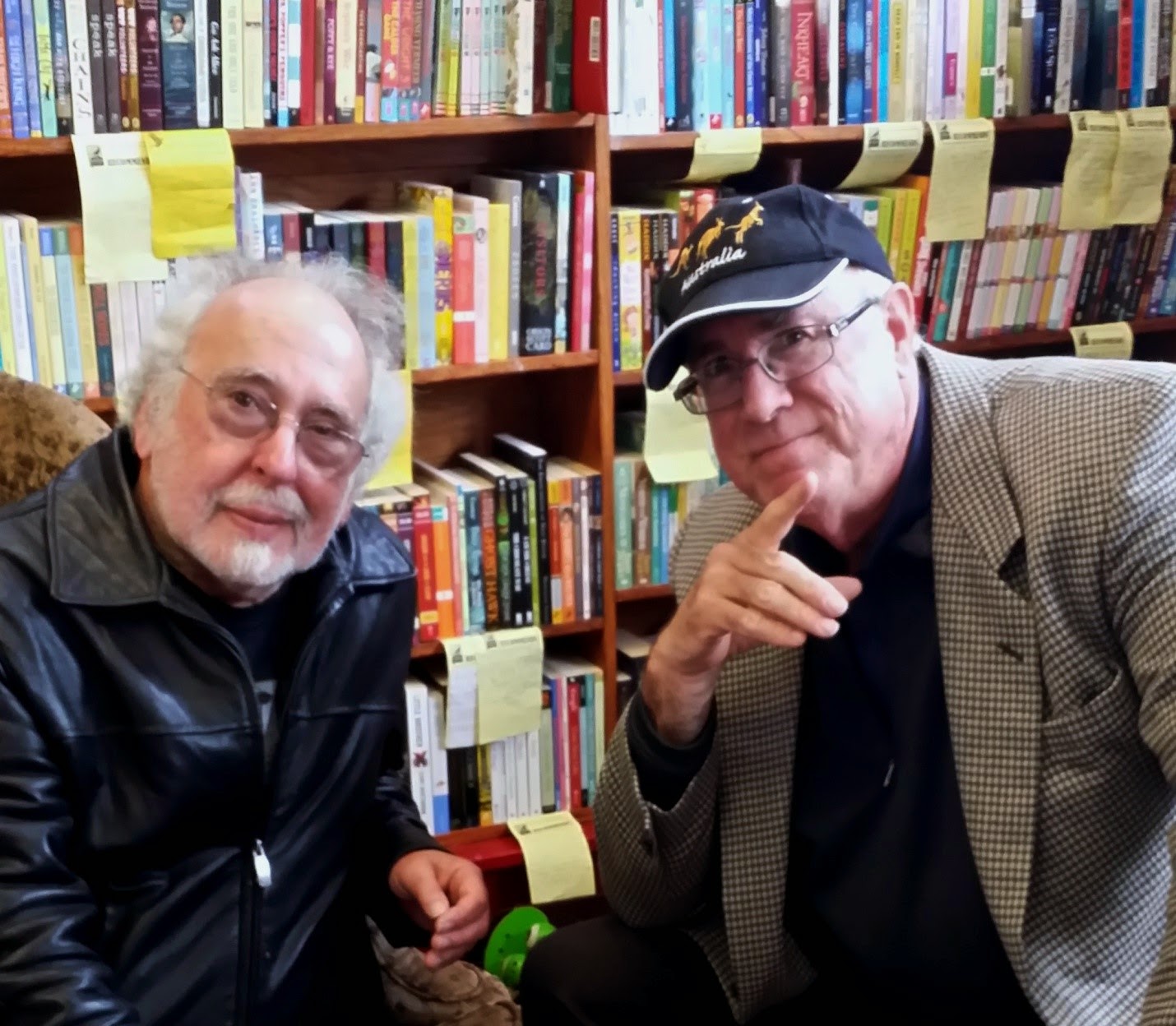 I suppose writers like him, who spin out their fairytale worlds, even though fraught with the brimstone of gentle satire, must be always consigned to that dreaded category, “Young Adult.” And all the patronizing attitude that goes with it. If that deflects readers from investigating this book, as well as so many other tales that have followed, such as Unicorn’s sequel, The Two Hearts, and Tamsin, Folk of the Air, and A Fine and Private Place, that is regrettable. For everywhere in his work reside truths of the heart, however mixed and ambivalent they may be. “The sight of her makes me want to do battle with all evil and ugliness,” says the lovestruck swain, Prince Lir, “but it also makes me want to sit still and be unhappy.”

In the final analysis, The Last Unicorn, stands above its own story and bravely places its heroes and villains, its castles and dungeons, its Magic and its Mortality, in the context of a child’s toybox—the Magic Cabinet of our youth:


“She looked down on a pale paring of land where a toy man and woman stared with their knitted eyes at a clay bull and a tiny ivory unicorn. Abandoned playthings—there was another doll, too, half-buried; and a sandcastle with a stick king propped up in one tilted turret. The tide would take it all in a moment, and nothing would be left but the flaccid birds of the beach, hopping in circles.”


Note: My thanks to Travis Ashmore of the Last Unicorn Tour and, from the KU Center for the Study of Science Fiction, James Gunn, Kij Johnson, and Chris McKitterick for facilitating my interview with Peter S. Beagle.

Posted by John C. Tibbetts at 4:25 PM No comments: