AVENGERS AND OTHER SUPERHEROES 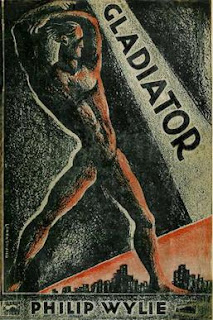 Whether or not you’re a fan of recent super-hero epics like Avengers: Infinity War, which breaks box office records, a colossal testament to cinematic greed and excess, or Logan and Unbreakable, which are master classes in how the whole superhero-genre can gain our respect, our attention might rightly be directed to one of its profoundly influential literary prototypes, which remains particularly relevant today.

Once upon a time, Philip Wylie wrote a novel called Gladiator. It was about a man who could lift weights of four tons with ease, leap such distances that he almost seemed to fly, shed machine-gun bullets with ease, rip bank vaults apart as if they were paper-mache. No, it wasn’t a Superman story. It was published in 1930, eight years before Schuster and Siegel produced their first “Superman” comic. Superman and every other superhero owe it a lot. In the opinion of fantasy and SF historian Joe Moskowitz, “Gladiator is probably the greatest tale of a physical superman since the Biblical story of Samson.”

In brief, it is the story of Hugo Danner, born the results of experimental drug treatments given to his mother. When the baby smashes his crib to smithereens, Mom knows she’s got trouble on her hands. She and her husband take great care in the training of their child to hide his strength and deal with the psychological impact of his growing awareness of his “differentness.” After demonstrating remarkable athletic feats as a youth, Hugo leaves home after accidentally killing a fellow athlete. Hugo has difficulty finding a place for himself, exploiting his great strength in prize fighting, strongman acts, pearl fishing, soldiering, farming, and even banking. But when he faces the inability of others to accept him, he determines it would be best to kill himself. The passages at the end of the book when Hugo considers his end are among the most moving in the genre:


Conscience was bickering inside him. Humanity was content; it would hate his new race. And the new race, being itself human, might grow top-heavy with power. If his theory about the great builders of the past was true, then perhaps this would explain why the past was no more. If the Titans disagreed and made war on each other—surely that would end the earth.

Amidst a raging thunderstorm, Hugo raises his fist to the lowering clouds. A lightning bolt strikes him dead.

With apologies to Nietzsche, Wylie himself had this to say about the possible advent of a race of superheroes. “For if ever there does appear upon this planet a tightly knit minority of really superior people, it will be the end of all the rest of mankind--and mankind knows it, not having come through a billion-odd years of evolutionary struggle for nothing.”

Fortunately, Wylie’s prophecy has yet to be fulfilled. But in the subsequent race of literary superheroes,” which his Gladiator so profoundly predicted, we find ourselves awash in their ilk. You can’t swing a stick—or Thor’s hammer, for that matter—without bumping into one. But be careful: You don’t want to piss them off. The moment they shed their benign agendas, we’re all in trouble.
Posted by John C. Tibbetts at 1:00 PM