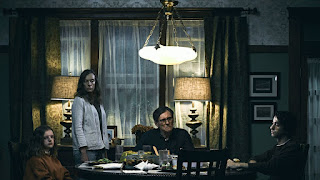 Object if you may to a horrific story about ghosts, gods, and seances, but at least pay homage to a cast of performers who give their all to the tale. Indeed, Toni Collette ratchets up a wrenching intensity as the mother to a haunted and traumatized family that places her on a par with Essie’s Davis’s frenzied performance in a similar role in The Babadook. And that’s high praise indeed.

The recent death of the reclusive matriarch of the Graham family triggers events that accelerate from a standing start to an all-out Gothic sprint at the end. The deceased’s daughter, Annie, is greatly troubled during the funeral, and her memorial speech is likewise troubling. She doesn’t seem to have liked the old girl, very much. And soon we find out why.

I should have known that something seems very wrong with this story at the very beginning: A slow camera dolly moves in to a cutaway of a doll house interior and into one of the tiny rooms. The stiff tableau of miniature family members suddenly comes to life. Welcome to the Graham family—father, mother, son, and daughter. Are they literally living in a doll house? Of course not. Well... maybe not.

True enough, their lives are exposed, the fourth wall torn away. And what we find is a family in the grip of nothing less than a coven of Black Magic worshipers inhabiting nearby a little hut perched on stilts. We don’t know this, at first; we have to pick our way through a thicket of sudden deaths, decapitations, and empty graves before the payoff. And all the while, we watch with mounting horror the psychological deterioration of Annie Graham and her son, Peter (another extraordinary performance by Alex Wolf). We can take comfort, I suppose, by ascribing the nightmares and apparitions of the dead to deranged mental states. But that’s too easy. HEREDITARY won’t allow us this refuge. It relentlessly confronts us finally with the reality of a witch’s cult.

Relentless, yes, but a slow-burning fuse at that. If ever there were a sincere film about witchcraft, this is it—rivalled only, perhaps, by Carl Dreyer’s classic Day of Wrath. The subtlety of camera work, editing, and mise-en-scene is marvelously suggestive without sacrificing the blunter aspects of the witching. And the impassioned conviction of the entire ensemble doesn’t allow us for a moment to ridicule or reject the Gothic claptrap to which the movie is occasionally liable.

And if the oddly lyrical and worshipful climax, delivering a stiff tableau worthy of any haunted doll house, doesn’t send you busily hunting down references to the demon god, Paiman, then your own demons are not worth their salt.
Posted by John C. Tibbetts at 7:50 AM No comments: