LET THE SUNSHINE IN 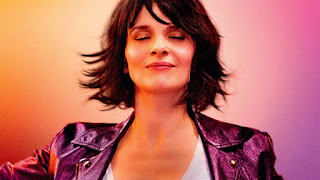 LET THE SUNSHINE IN. Directed by Claire Denis and starring Juliette Binoche as Isabelle. With a surprise appearance by Gerard Depardieu.

How sadly funny this movie is!

That is not apparent, at first. For awhile, you think you’re watching a throwback to those French films of the 60’s by Eric Rohmer or Chabrol or Godard, where everyone talks seriously and endlessly about everything and anything. That’s what our 50-something Isabelle (Binoche) is doing with the various men in her life. In the bedroom, the art gallery, the theater, the country, they talk, endlessly, their words, sentences, looping in and out of each other, tentative, halting, stopping altogether, reversing course, circling back again; full of reversals and contradictions; and ultimately, and maddeningly—all of it irrelevant. Life, love, relationships, the arts, the landscape, the Whole Damned Thing, are all here to be talked about examined, analyzed, questioned, and dismissed.

It’s all so serious, in a deadpan way, until you realize that this is really a sad comedy where, despite all the talk, nothing is happening. Indeed, nothing makes any sense. And that’s the joke that begins to dawn on us. Isabelle’s gallery of men—the brusque middle-aged banker, the ambivalent young stage actor, the distant gallery owner, the former husband and father of her 10-year old daughter—advance and retreat, here, then there, then gone again. She seems to be hungering for commitments but moves in a world that offers none.

Isabelle is the still-point of all this, sometimes wracked in sobs, sometimes regarding it all with that amazing bemused smile of hers. But hers is a restless centering as people and situations revolve around her, popping in and out of her life, inscribing a weird kind of geometry.

A random geometry of life and love.

And so it is, finally, that Isabelle sits down with a man who seems to be her advisor, her guru, her Mystery Man. Who the hell is he??? Then comes the surprise: it’s Gerard Depardieu, sitting there in the half-light! He gazes at some photographs of her lovers. He launches into a monologue. He spins out this remarkable nonstop string of observations about her lovers past and present. Some will fulfill her needs, some will not. Others are yet to appear. And they might be the Great Love. Or maybe not. On and on he goes. While Isabelle just sits there, an enigmatic smile on her face. “Be open,” the man is telling her. “Be open.” She repeats the words, over and over. It’s her mantra. And while he talks, the camera tilts down ever so slightly to reveal that all the while he is waving a pendulum over the photographs, like a divining rod, seeking their Mysteries.

Even while the credits scroll down the screen he keeps talking. Nothing can stop him. Until the screen grows dark.

We are laughing, by this time. Even if we can never be sure what we are laughing at.
Posted by John C. Tibbetts at 6:14 AM