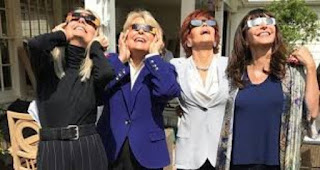 In the first place, the book that is being read by the women in this club is hardly a “book,” but Fifty Shades of Gray, more of a screed about kinky sex indulged in by men and women alike than a tome for active discussion. And in the second place, this “club” is more of a refuge for women talking about men—the men they dislike, the men they yearn for, the men they forgot, the men that disappointed them—than for women talking about politics, home life, local gossip, professions, and, yes, sometimes about men.

Either way, this movie is an equal opportunity insult—to books, to the women who enjoy them, and to the clubs that bring readers together.

The women in question here are Jane Fonda, a wealthy hotel owner who avoids commitments to the many men who slip in and out of her bed; Mary Steenburgen, a wife disappointed by a husband who straddles a motorcycle instead of her; Diane Keaton, lately widowed, whose possessive daughters restrict any opportunities for a new man in her life; and Candice Bergen, a federal judge who for decades would rather handle court documents than a man. Of the bunch, it is only Bergen who delivers a candid and lively performance that bears the remotest connection to the realities of a woman of a certain age navigating today’s freewheeling singles scene.

For these four women the Book Club is more of a group confessional in which they exchange smarmy winks about Fifty Shades of Gray and trade advice about how to snare a man than it is for anything more intelligent and engagingly personal. Just ask any women you know in book clubs and they’ll share the dismay at what’s on screen. I have. And they do.

Do the men come off any better? Well, yes and no. Andy Garcia has a winning charm. And Don Johnson is, well, he’s Don Johnson. He has the best line in the book: “Love,” he says, “is just a word; it’s what you make of it.” They both cut through the nonsense thrown at them by, respectively, the flighty and annoying Diane Keaton and the hardened, unlikeable Jane Fonda . I hate to say it, but neither Fonda nor Keaton transcend their by-now standard collections of tics, grimaces, and, in Fonda’s case, dismaying plastic surgeries.

Which leads me to my greatest disappointment. These four actresses have obviously settled for less in doing this movie. They deserve better. And so do we, who have grown to love and respect their work.

Is there a real movie in here, somewhere? Indeed, what would a movie about a women’s book club look and sound like? BOOK CLUB grants us no answers.
Posted by John C. Tibbetts at 5:16 AM