AVENGERS: INFINITY WAR or, HOW THOR GOT HIS AXE PART ONE 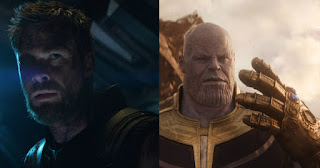 Directed by Anthony and Joe Russo. Starring everybody in the whole damned Marvel Universe (including Stan Lee as a bus driver)

Yes, subtitle this mess “How Thor Got His Axe.” And add, “How Thanos Got His Sunset”, and how “Viewers Got Dust Thrown In Their Eyes”. . .

I admit I am the last person to be fair to this movie. I’ve been on record for years about the silliness of this stuff. And as an educator I’ve been forced to watch with growing dismay its addictive results on adolescents and teens. (You might as well shoot this into their veins.) But at the same time, I should be the most qualified person to judge this movie, since I was weaned as a boy on the exploits of John Carter of Mars, the story of a Confederate Army Captain who gained Superhero-Dom on the Planet Mars (and whose name was conferred on me by Edgar Rice Burroughs himself). Big John kinda started this whole thing. Am I a hypocrite to condemn the former while privileging the latter?

At least John Carter’s story was one of the spiritual yearning for Identity, the longing for a rightful home that transcended space and time.

What do have with AVENGERS? An anti-story. A cynical grab at box office bucks. (It’s worked!) Patches and shards of special effects and massive suits of armor and mystical mumbo-jumbo and some Business about The Six Stones that may determine the fate of the Universe.

Okay, Big Thanos: MAKE A FIST. Your gauntlet has six settings into which the Six Stones can be affixed. And then, all Hell will break loose. And you can enjoy your damned sunset.

Pity poor Wakanda, by the way. It had its moment in the sun a few months ago; and now... well, you know...

But let me turn to the redoubtable critic Anthony Lane, who can skewer a superhero movie better than most. He advises us that for just $19.99 Thanos could have collected all the Six Stones on the QVC Network! (That in itself is punishment enough). He adds, “Why is it always the Universe that’s at stake in these stories? Why not Hackensack? Does anybody care what happens to South Dakota, or Denmark, or Peru?”

And I’m going to steal from Lane a quote he attributes to Sigmund Freud, which says a lot about all of us who fall victim to films like AVENGERS: “Even dire criminals and comic heroes captivate us within the context of the arts by dint of the narcissistic rigor with which they keep at bay anything tending to diminish their ego.”

Finally, if you’re puzzled about the Dust Storm that concludes AVENGERS: INFINITY WARS, I advise you to read Philip Pullman’s magnificent epic trilogy, His Dark Materials. It answers everything...

I also hope you will read Philip Wylie’s classic Gladiator, first published in 1930. It’s a superhero story, THE superhero story, which stands alongside John Carter. More on that in a second installment to come.
Posted by John C. Tibbetts at 8:34 AM