THE LOST CITY OF Z 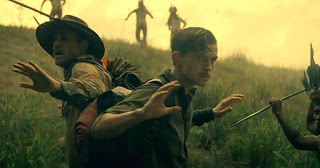 Directed by James Gray. Starring Charlie Hunnam as Percy Fawcett, James Pattinson as Costin, and Tom Holland as his son.

Combining a story about a Lost City with the music of Maurice Ravel proves to be useful. Several times the music from Ravel’s ballet, Daphnis et Chloe, underscores visions of the tangled forests and rushing rivers of Bolivia and Brazil. Just as the music evokes Greek myths of Paradise, so THE LOST CITY OF Z likewise envisions its own primeval world as it plunges its protagonist, British soldier and explorer Percy Fawcett, into his ill-fated search for a fabled City of Gold.

Make that three expeditions, in 1902, again in 1912, and finally in 1924. In the first two, after privations of starvation, disease, and near-death risks at the hands of indigenous peoples, Percy has to turn back short of his goal—but not before discovering some shards and fragments of pottery, suggestive of the remains of a former civilization. In the third, the obsessed Fawcett and his intrepid son, Jack, again nearly reach the goal, but. . . well, what happened after that is “lost” in its own myth and speculation. The film’s dreamy epilogue shows that the two men were captured by natives and, after being subjected to a mysterious ritual of food and drink, were subjected to a fate unknown, possibly cannibalism. Or, maybe they did not die at all, but remained there for years, peacefully living with the natives. Significantly, perhaps, Fawcett’s compass, which he had foretold would arrive back in England as a sign that he had reached his goal, did indeed find itself in the hands of the president of the Royal Geographical Society.

At two and a half hours, THE LOST CITY OF Z at times seems as endless and twisty as Fawcett’s expeditions. As one expedition follows the other, there’s an intervening episode of World War I., where Fawcett barely survives a charge in the Battle of the Somme in 1916. Several times as the film just keeps on trucking along, hacking its own way through the thickly-forested narrative, I found myself, asking, Are we there yet? Moreover, forgive me if I found Fawcett’s arbitrarily tacked on preachments to the Royal Geographical Society about the nobility of civilizations that pre-existed Merry Olde England—not to mention his warnings that “civilized” men endangered those pre-historical civilizations—tiresome and arbitrary.

The film is decidedly Old School, straight out of Haggard and Kipling. Early on, Kipling’s poem, “The Explorer” (1898) is quoted, and its message resonates throughout:

And we go there, all too willingly, even if we are not sure of our destination. 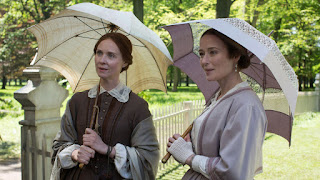 Unlike Emily Dickinson’s famous lines (1830-1886) that Death “kindly stopped” for her, the death that is described in A QUIET PASSION comes only after a series of cruel, unrelenting scenes of suffering. Seldom has the very process of death in its gasps, heavings, and prostrate convulsions been depicted so graphically under the unrelenting eye of the camera. In this respect, the life and death of the fabled Woman in White is stripped of any sentimentalizing. The “Belle of Amherst” does not lie quietly in her grave. Nor does she rest easily in posterity.

I must affirm, nonetheless, that in the final analysis, A QUIET PASSION is a very quiet film, a prolonged silent cry of protest, recriminations, anger, and resentment. The soundtrack is bereft of music, save for a song at the film’s opening of a song by Schubert [“Nacht und Traume”], and a scattering of ditties like “The Last Rose of Summer,” a few phrases of Stephen Foster’s “Jeanie with the Light Brown Hair,” and finally, as a valediction after her death, the long, slow, quietly winding phrases of Charles Ives’s “The Unanswered Question.” This last wraps the story and its characters in a quietly enduring enigma that is, finally, Emily Dickinson herself.

From our first view of her amidst the stifling moral recriminations hurled at her by the awful headmistress of Mt. Holyoke School, high-strung Emily is confined and pinned to the mat by the disapprovals and recriminations of her family, friends, neighbors, and a repressive Massachusetts middle-class society. The claustrophobic mise-en-scene confirms the horror of her entrapment in its several 360-pans that limns the starchy gallery of characters clustered around her in the lifeless, and dim interiors. (Indeed, Terence Davies once again proclaims himself as the “Poet of Interiors.”) And Emily, herself, at the end, as her own room implodes upon her, famously refuses to appear outside her door. She must endure the ongoing horrors of Bright’s disease with scarcely a sound from her grimly tight lips. Claustrophobic, yes, with scarcely a sense in its last half of any world outside the Dickinson house. Ironically, the closing credits disclose that some of the film was shot on location in Emily’s beloved Amherst, Massachusetts. They could have been shot in Timbuktoo, for all the visual import they have.

Emily Dickinson’s drama is revealed as something straight out of Eugene O’Neill. A QUIET PASSION becomes a sort of A Long Day’s Journey into Amherst. The dialogue is self-consciously studied and posed. Everyone hurls aphorisms and witticisms, by turns wicked, clever, and dangerous, at each other, like combatants lobbing grenades in a No Man’s Land. At times, the archness of these exchanges gets too precious, and you would be forgiven for wearying of the artful intelligence and cynicism everyone, not just Emily herself, wields with surgical precision. Particularly tedious are the extended dialogues between Emily and a character that has been inserted into the story, her proto-feminist friend, the wily Vryling Buffam. Indeed, the script at times is insufferably arch and precious. But, yet, all is forgiven, for there is Cynthia Nixon’s Emily, lurking above the fray atop the stairs, glaring at the world, her round face perched precariously atop a long neck, hair severely drawn back in a bun, eyes sometimes glittering with mania, voice scratching and abrasive. Here she is in all her petty feuds, righteous anger, grim frustration, and spiritual confusion. “She scrapes against the grain of the movie’s decorum,” writes critic Anthony Lane, “and asks, What kind of soul did you expect, at the root of poems like these?”

And yes, the poetry. A QUIET PASSION belongs to a select genre of movies about poets and poetry, from D.W. Griffith’s quotations of Robert Browning in Pippa Passes, to Glenda Jackson’s tender declamation of the poetry of Stevie Smith in Stevie, to the lush lyricism of the blighted love between John Keats and Fanny Brown in Bright Star. Here, in A QUIET PASSION, Dickinson’s lines are voiced by Nixon herself at strategic moments, a quiet counterpoint to wordless scenes, and, at other times, deftly slipped into the very dialogues. At one point, her lines are heard with only the image of a closed door before us.

Terence Davis is one mighty brave director to pull all this off with scarcely a concession to romanticizing Emily’s story. The one exception comes during Emily’s lines about the Death that awaits her as visualized in a shadowy male figure, silhouetted in the doorway of the house, who moves slowly up the stairs toward her door. But this tender and shadowy vision is quickly offset by the very material horrors of her decidedly unvarnished sufferings.

There is a clever visual device Davies employs twice to convey both the passage of time and Emily’s identity as myth and reality: I refer to an early scene when the camera moves slowly into the posed figures of the Dickinson family members, each subtly altered from youthful faces to the more set and stern expressions of advancing age. And at the very end, Davis repeats the procedure, this time prolonging a shot of Cynthia Nixon’s face as it dissolves into the familiar portrait of Emily herself. The technique speaks of time and identity. It is its own poetry.

Posted by John C. Tibbetts at 9:45 AM No comments: