Should the spontaneity of the creative urge be counterbalanced by the restraint of reflection and reconsideration? This new biopic about the relationship between novelist Tom Wolfe and his editor at Scribner’s publishers, Maxwell Perkins, considers the issue. The “genius” of this dual portrait is not just that the editor restrains the novelist, or that the novelist rebels against the editor. No, GENIUS shows how the two enter into a reciprocal dynamic.

Two contrasting scenes provide a case in point. In the first, mild-mannered Perkins and volatile Wolfe are in Perkins’s office locked in nothing short of literary combat as they pore over passages from the manuscript of Wolfe’s first novel, Look Homeward, Angel. Perkins tries to cut and trim Wolfe’s notoriously expansive and unwieldy verbiage. “Cut! Cut!” shouts Perkins. Protest! Protest! groans Wolfe. He watches in dismay as Perkins’ blue pencil dances across the typescript, line by line, correcting, erasing, questioning. Each cut by the relentless Perkins is answered by two more lines from the stubborn Wolfe. And so it goes. Eventually, the offending page has been sawn in half, as it were. The two men, gaze happily at each other, exhausted. While Perkins releases the core beauty of Wolfe’s sprawling prose, Wolfe in turn learns lessons in concision and restraint.

Now we turn to the second scene, which reverses the process. Perkins has dragged the reluctant Wolfe to a lower East Side jazz joint. Perkins admits he doesn’t like music. Wolfe takes up the challenge and demands Perkins choose a favorite song for the jazz combo. Right. “Flow Gentle, Sweet Afton”? The combo takes up the tune, moderate at first, but then explodes into a syncopated frenzy. It’s Perkins’ turn to be educated. The formally stiff editor loosens up under the spell of the hot music, and we see him for the first time shamelessly intoxicated and in synch with Wolfe’s volcanic energies.

The rest of the film extends and confirms the exchange that produces this unstable compound of Art and Craft... and ultimately the struggle to bring Life itself to the printed page.

I submit GENIUS to any prospective writer who feels himself or herself free of the restraints of an editor. Most writers know and respect that humbling process. And most editors justifiably regard themselves as essential partners in the creative work. Not just Wolfe, but many other writers have depended upon the sobering influences of the professional editor. I cite short-story writer Raymond Carver as a prime example. Where would the tight concision and spare prose of his work be without his editor, Gordon Lish? (See the fictionalization of this process in Stephane Michaka’s novel, Scissors.)

By contrast, consider the fate of a writer like Ray Bradbury, surely the latter-day inheritor of Tom Wolfe’s extravagantly descriptive prose. It pains me to acknowledge that the beauty of Bradbury’s prose that enlivens the first two-and-half-decades of his work gradually became bloated and overwrought in the last three decades of his life. As long as he was responsive to friends, editors, and associates, few American writers produced such masterly writing. But when, like Wolfe, he fell so much in love with his prose, it overmastered him. It was like he puffed so vigorously into a balloon, that the balloon soared aloft, carrying Ray with it, leaving behind considerations of story and character.

Let GENIUS be an object lesson—and a warning—to all of us who strive to breathe life into our writing. Having said that, I feel the breath of Maxwell Perkins on my neck— 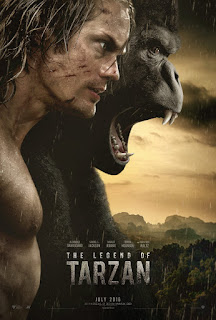 Edgar Rice Burroughs always found new ways to plunge a civilized John Clayton back into his native jungles to resume life—with scarcely a missed step—as Tarzan of the Apes. In Tarzan and the Foreign Legion, for example, he’s a World War II Air Force officer whose shot-down plane plunges him into the Sumatra jungles to continue the War. And here in the new Warner Bros. film, THE LEGEND OF TARZAN, he’s a late-19th century aristocrat who effortlessly sheds his waistcoat and cravat and finds himself back in the Congo to foil a plot by the King of Belgium to enslave the Congolese.

And so, we’re off and running. Or, to put a finer point on it, swinging... I have to confess since my boyhood, all I really cared about in the many Tarzan movies was the vine-swinging quotient. Across the decades, the aerial escapades have really been the bottom line for me. But good tree-swinging has proven to be sporadic at best. Lumbering ancient Elmo Lincoln in 1918 was earthbound. The young Johnny Weissmuller did a fair job, courtesy of a team of acrobats in his first three films, TARZAN THE APE MAN, TARZAN AND HIS MATE, and TARZAN ESCAPES (1932-36); but as he grew heftier in the mid-1940s most of the tree-swinging abated. Gordon Scott’s Tarzan in the late 1950s was too muscle-bound to soar aloft. A few years later an emaciated Jock Mahoney spent most of his time on the ground. And in GREYSTOKE, Christoph Lambert was too busy in England to indulge in much aerial hi-jinks.


Now, in LEGEND OF TARZAN Alexander Skarsgard gives us a couple of nifty flying sequences, but that’s all. Most of the time he’s preoccupied with rescuing Jane from the clutches of the evil Christoph Waltz. At other times he’s fending off the wisecracks of his sidekick, Samuel L. Jackson.

Most of the familiar tropes are here. Jane is abducted, of course. She’s always a captive of somebody or other. And when things look hopeless with the bad guys, Tarzan summons the beasts of field, vine, and water to come to the rescue. One detail is different, though: In the inevitable clash with a Great Ape he gets pounded into the ground. And his famous yell is different. “What’s that?” someone asks. “It’s Tarzan,” comes the reply, “only it sounds different.”

Unfortunately the film fails to explore the anxieties crucial to any Tarzan tale: John Clayton’s confusion between his aristocratic heritage and his savage jungle instincts. Alas, no identity confusion here. Instead, Alexander Skarsgard’s passively slips in and out of both identities without batting an eye. Author Burroughs at least was quite clear about it: We forget that he ended TARZAN OF THE APES with a noble act of renunciation: John Clayton gives up his claims to the titles and estate of the House of Greystoke and as Tarzan returns to the jungles where he belongs. He doesn’t question the mystery of his origins. “I was born there,” he says quietly. “My mother was an Ape, and of course she couldn’t tell me much about it. I never knew who my father was..."

That’s the right of things. The jungle is, after all, where the trees and vine are...

Posted by John C. Tibbetts at 9:13 AM No comments: