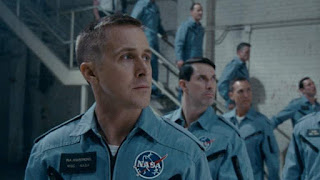 FIRST MAN is a big box of visual and aural tricks with which the film manages not to tell its story of the first man on the moon, but to suggest it. It’s almost—but not quite—a ho-hum event. Witness this brief exchange between spaceman Neil Armstrong’s wife and son: She tells the boy his father is going to the moon. The child replies, indifferently, “Can I go outside and play?” Life is like that in this movie: Daddy “goes outside” to the moon; his son “goes outside” to play.

Thus, FIRST MAN is an almost offhand treatment of events that will be familiar to those of us alive and aware at the time of Armstrong and Buzz Aldrin’s walk on the moon on July 20, 1969. Newer viewers unaware of the details of the story are likely to spend moments in this movie puzzled and wondering just what is going on. The movie is an evasive maneuver and seems perversely determined to catch those viewers guessing, while parsing out the story in dribs and drabs.

Consider. Notably lacking is the apparatus included in most historical films, i.e., those helpful narrative devices of billboarded titles, a few newspaper headlines, newsreels, and radio broadcasts that contextualize the narrative. Only at the end, as Armstrong’s foot plants itself in the lunar dust, do we get a smattering of same. Instead, for most of the time, snatches of conversations are sometimes muttered, evaded, interrupted—even unintelligible at crucial moments. The characters keep their backs turned to us at times; at others, they are almost lost in the background of a shot. And what they say is, well, more unsaid than said. And the Big Moments of the drama are so downplayed as to be almost repressed. Example: When the final decision is made that Armstrong will be commander of Apollo Eleven, you can almost hear him saying, “Okay, now pass the salt.”

Now, all of this is quite appropriate to the way Armstrong himself comes across to us. At times he’s IN space; at others, he’s rather OUT of it—

Seldom has a visual style and a psychological portrait been so strongly unified as in this portrait of the first man on the moon, Neil Armstrong. We see him sidelong, as it were, from a skewed angle, his words few and his expressions spare. He is remote, diffident, distant from his fellow astronauts, mostly absent from home life. His emotional distance from his long-suffering wife and children is as remote as his distance from the moon. It’s all his wife can do to persuade him to talk things over with his children before the Launch. No matter the chaos around him—be it an unruly child, a test pilot crash, a space capsule emergency, a near-miss of the moon—he is unruffled and remote.

What’s explains the psychic and emotional trauma behind this man? The film gives us an answer—sort of. It begins with the apparent loss of his baby daughter to cancer. At least, I think that’s what happened. The montage of images is so select and so subtle, that we wonder if it happened at all. By the way, the child does appear to him in later scenes. In a way, to him, she never died—

I might add that Ryan Gosling’s performance as Armstrong is perfectly attuned to this sort of measured distance from people and feelings. No one on the planet—or on the moon—can better convey this sort of thing. Remember Lars and the Real Girl?

Posted by John C. Tibbetts at 8:07 AM No comments:

BAD TIMES AT THE EL ROYALE 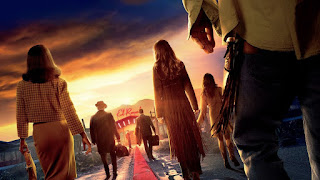 Directed by Drew Goddard, starring Jeff Bridges as the priest, Cynthia Erivo as the singer, Lewis Pullman as the hotel proprietor, Jon Hamm as the FBI agent, Chris Hemsworth as the false prophet, and Dakota Johnson and Cailee Spaeny as the sisters.

BAD TIMES AT THE EL ROYALE might be the best thing in the theaters at the moment.

Check in at the most bizarre hotel this side of Barton Fink, where a group of travelers gather for a night of confrontations, revelations, and gruesome violence. And speaking of the Coen Brothers, BAD TIMES is right out of their playbook. It’s a dangerous Neo-Noir set in the late 1960s. It’s a dark and stormy night. Lightning flashes fitfully illuminate the scene. The blood-stained guest register introduces a motley cast of characters. And despite the grim pleasures of it all, there’s a moment of grace that tops it all off at the end.

There’s the priest who’s not a priest but a thief and ex-con looking for buried money under the floorboards of one of the hotel’s rooms; a vacuum salesman who’s an FBI agent keeping the hotel under surveillance; a struggling lounge singer who just wants to get to a gig in Reno; two young ladies on the run from a phony evangelist, and a self-styled hick evangelist who lives by his own infernal playbook. And yes, the hotel proprietor with lots of secrets of his own: He’s left a string of bodies in his wake; moreover, he possesses an incriminating piece of surveillance film. Did I say “surveillance”? The El Royale Hotel is a voyeur’s paradise. A secret corridor of one-way mirrors affords uninvited glimpses into the unholy activities of the occupants within.

The narrative line is a tangle. We view brief vignettes of each of these lives, only to be rudely wrenched out of the scene by savage and abrupt shock cuts. Events are then rewound and repeated by reverse angles viewed through the one-way mirrors. It’s disorienting, but fascinating. Indeed, a certain diabolical pleasure holds us in a kind of thrall as we piece together the shards and fragments of the story.

Of course, it all ends up in a holocaust of flames, bullets, and bodies. Everything gets sorted out... sort of. But amid the penultimate moments, when the priest who’s not a priest hears a last-gasp confession and delivers his own absolution, we are moved by an experience that is nothing less than an epiphany.

So many things could gone wrong here; the kaleidoscopic assortment of characters and fractured incidents could have fallen apart at any moment.... However, the conviction and power of all these players keep things under control. In particular, Jeff Bridges and Cynthia Erivo deliver beautifully crafted performances. Bridges’ faux confession scene is among his very finest moments on screen. Erivo’s quietly nuanced a capella singing provides the soul of the story. Indeed, I came away, wondering, who is this Cynthia Erivo? I had not seen or heard her before. But her quietly desperate lounge singer is a miracle of subtlety. On both counts we have here Oscar-caliber moments. (Note: Erivo is a British actress and singer recently distinguished for her Tony Award-winning performance on Broadway of “Celie” in The Color Purple.)

In brief, this is a movie for the jaundiced eye.
Posted by John C. Tibbetts at 10:33 AM No comments: 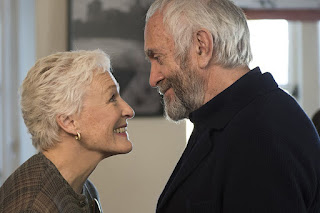 Directed by Bjorn Runge, starring Glenn Close and Jonathan Pryce as Joan and Joe Castlemans and Christian Slater as the journalist.

GHOST WRITERS IN THE SKY!

In THE WIFE, veteran actors Glenn Close and Jonathan Pryce have been ill-served by a lame and improbable script. Too bad. It should have been fun to see these two pros on screen. What results, however, is mostly a pompous, strutting Pryce and a showcase for the Glenn Close Enigmatic Stare.

Dramas about writers and writing are notoriously difficult to bring across. There are exceptions, notably Jane Campion’s Angel at My Table, about Janet Frame, and End of the Tour, about David Foster Wallace. And recently we have had Genius, about the relationship between Thomas Wolfe and editor Maxwell Perkins—whose subject of an editorial hand behind the writer’s success rather resembles THE WIFE.

But THE WIFE doesn’t belong in that accompany.

After more than thirty years spent ghostwriting her husband’s books, Joan Castleman watches in dismay as her husband Joe thanks her during the ceremony in Stockholm for being his muse and support. Disgusted, she leaves and threatens divorce. She would rather live in anonymity than be credited merely as his helpmate. But she is more than that. She wrote his books in secret, all of them, behind a closed door, the family unaware of what was going on. All this time, her husband’s main job has been to stay out of her way. Check that: He does do something: He cracks walnuts a lot. I kid you not. He not only cracks them for her, but he cracks them for all his mistresses, too. That’s a lot of walnuts. And a lot of mistresses. Even the title of one of his books is The Walnut. Really. I expected a “walnut wrangler” on the end credits. How he’s been able to disguise the fact that he hasn’t been writing at all is never explained. Maybe the walnut-cracking was enough to fill his spare time. The closest he gets to literature is to quote James Joyce to any young lady who catches his eye. Have a walnut?

Poor Joan Castleman. Is she another downtrodden female writer? Not a bit of it. She’s not only content to be his ghostwriter, but flashbacks reveal that she had wanted to write his books. It was her idea from the get-go. He thinks he is seducing her; but in reality it is she who has been seducing him, catering to his ambitions for the success, fame, and privilege of a successful writer. She is no victim. This is her choice. Who is guiltier of hoaxing the public, he or she? As for that celebrated Glenn Close Enigmatic Smile, is this the expression of a wronged wife or a crafty manipulator? And yet, at the end, we’re supposed to believe that she has HATED this all along. Please.

I realize this is probably a subversive reading that I’m offering here, one that is completely counter to the movie’s putative commentary on The Wronged Woman. . . but that’s my take and I’m sticking to it.

Meanwhile, what about the Castleman books? What do we know about them? Why the Nobel Prize? According to the speech at the Nobel ceremony, Castleman’s books have “changed the course of literature.” Whatever that means. Too bad such superlatives don’t describe this script.

We can’t forget another character who shows up at the proceedings. He’s a trash journalist, a ruthless opportunist who wants to write the tell-all expose of the Castleman’s chicanery. Christian Slater is perfectly cast and perfectly hateful. He’s right where he belongs. He and the Castlemans deserve each other. His dialogues with Mrs. Castleman demonstrate only that she’s a greater fake than he is.

Lastly, there is one more tag-along character in this wearisome parade. And that is Castleman’s son, a budding writer, God help him. He wears a perpetually surly expression and wrings his hands because Daddy won’t praise his own pitiful stories. Does he know that the best example Daddy can provide him is how to find a beautiful graduate student who will do the writing for him? As for the nut-cracking, he is on his own.
Posted by John C. Tibbetts at 8:46 AM No comments: