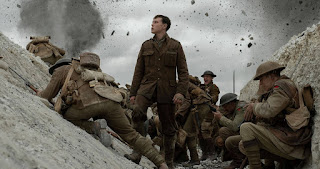 1917 opens on an idyllic image of two soldiers, asleep, resting against a tree. The fields around them are verdant, the air quiet. All is at peace. By story’s end roughly twenty-four hours later, all is at peace again. The fields are still green. But now, after the many hazards of a desperate quest, only one soldier takes his rest. He alone has survived within this perfect circle of events. And we now know that these two moments of peace were only respites against the relentless brutality of war and slaughter.

April 1917. Two young British lance corporals are assigned an impossible mission: They are to deliver a message across enemy lines to a battalion readying for a charge. Unless that charge is stopped, the soldiers will be slaughtered. And so, the odyssey of these two reluctant heroes begins. But only one will complete the mission.

Not since The Revenant and Gravity have I seen such a harrowing struggle for survival. And, like both those films, much of the action is captured in uncut shots by a restless, roving camera. That relentless eye sometimes follows the action, sometimes pursues it. It soars above at times for the aerial view, and at other it plunges below for the tight closeup. Its pitiless omniscience takes no sides. All that matters is the story of the soldiers’ race against death as they track a breathless trajectory through tunneled trenches, mortar-scarred fields, barbed-wire emplacements, demolished buildings. How can human frailty withstand the Furies of War?

Dean-Charles Chapman and George MacKay portray the two soldiers. To them goes our admiration, our respect, our honor. The grit and danger they face is all too real. Making the film must have been an endurance test. It’s as if director Sam Mendes is determined to throw everything at them. George MacKay, in particular, is the one left to shoulder the burden of the rescue mission. When he’s not dodging a crashing airplane, digging himself out of an underground bunker, buffeting raging flood waters, he’s racing madly through the chaos of shot and shell, a broken-field runner thrown to the ground, rising, thrown down again. Again. Again. Only a few moments of respite are granted him: There’s a hushed calm when he fills his canteen with a newly discovered pail of fresh milk; and there’s hushed intensity when he shares a moment with a lone woman and child while hiding from surrounding Germans.

To the great cinematographer Roger Deakins we bow in admiration for the most amazing camerawork of this or any time. There is doubtless some trickery behind the apparently seamless two hours of real-time action. Well, obviously, it’s not real time. Two hours of screen time somehow becomes twenty-four hours of dramatic time. And we can peer closely at the action to try to determine how those long takes might actually be a series of discrete takes. We can do that, and critics and observers are already divining the techniques behind the magic. But the rest of us can only fall back in astonishment.

1917 is destined for several Oscar nominations, including Best Picture and Best Cinematography. The latter is surely a “lock.”