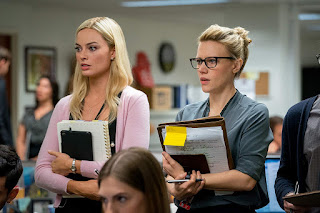 Already the media is asking questions about BOMBSHELL’s gallery of lookalike actresses and actors: How many prosthetics did Charlize Theron wear in her portrayal of Fox newswoman Megyn Kelly? Did lowering her voice damage her throat? Is John Lithgow’s prosthetic padding more lifelike than Russell Crowe’s in his portrayal of Ailes in The Loudest Voice earlier this year? Etc. This is unfortunate, because that sort of verisimilitude is bound to fail at close quarters. Too often the screen is crowded with a gallery of lookalikes—Chris Wallace, Rudy Giuliani, Judge Jeanine Pirro, Bill O’Reilly, etc.—that comes across as one of those crowded Al Hirschfeld panels of caricatured celebrities. The best we can say is that as caricatures they are playing an amusing game of charades. But “amusing” is not what we’re after, here.

Otherwise, BOMBSHELL switches the polarities of the standard newsroom expose. Recent films like Official Secrets (one of my favorite movies earlier this year) and Dark Water deployed media to uncover scandals and misdeeds. BOMBSHELL turns inward: It’s the Fox News operation that is itself exposed. And I’m not just talking about Roger Ailes’s infamous directive that the Fox anchor women sit at desks whose transparent glass revealed their legs. Ailes’ spectacular fall from grace (?) is by now well known and documented. The same holds true for the bitter struggles of anchorwomen Megyn Kelly and Gretchen Carlsen against the predations of Ailes.

So, I found myself looking more at the edges of the frame, looking for characters and stories that are not well known. The presence of Kate McKinnon, for example, as a closeted lesbian concealing a picture of herself and her lover under her newsroom desk, is more than a disturbing footnote to this story. While the gender politics play out in the heterosexual arena, it is her character of Jess Carr who must remain silent—concealing not just her sexual identity but her liberal views. Praise must go to BOMBSHELL for craftily inserting this disturbing secondary story, for it points out the fact that the “bombshell” revelations of the doings at Fox News are only part of a much more complicated picture. Behind every desk at Fox News—or any other print and broadcast newsroom, for that matter—there are other stories, like Jess’s, that remain muffled and hidden.

When will those stories be told?

Pardon me now. Emerging from the toxic waste dump of BOMBSHELL, I’m washing my hands. Then I’ll go back to see The Two Popes again. There are secrets there, too. But played out in a rather different arena.