KNIVES OUT: THEY ALL DUN IT! (OR COULD HAVE) 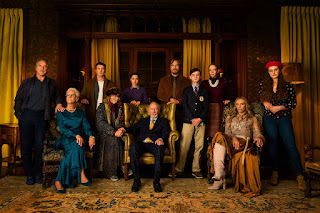 Directed by Rian Johnson with an all-star cast.

I must admit that at first I was mildly surprised at the continuing box-office popularity of KNIVES OUT. The traditional cozy scheme of the body in the library attended by a bunch of suspicious characters is sometimes scorned in favor of the tough-guy noir school of crime fiction. But, when you think about it, the cozy Agatha Christie-style of thriller is just as dangerous as anything this side of Sam Spade. And that’s box office. Both types depend on one core consideration: They all dun it! Or—They all could’ve dun it! Indeed, in Christie’s The Orient Express, everybody DID INDEED DO IT!

Now there’s a sobering thought. Guilt is spread all around, like poisoned jam on toast.

The fact that in KNIVES OUT only one person is ultimately unmasked by detective Benoit Blanc (Daniel Craig) doesn’t fool me. The list of suspects are all proven to be potential murderers: Arrayed around the dead body of Harlan Thrombey (Christopher Plummer) are his vicious family members, including the manic Joni (Toni Collette), menacing Walt (Michael Shannon), scheming Linda (Jamie Lee Curtis), rakish Morris (Don Johnson), and the mysteriously absent Hugh (Chris Evans).

Don’t turn your back on any of them.

Another trope dear to my heart with such doings is the Big Reveal. Yes, gather everybody around the fireplace and the detective will solve the mystery, no matter how impossible or impenetrable it seems. The only problem is, that the explanation is sometimes so byzantine in its complexity that we fall back in bewilderment:

Will somebody please explain the explanation?

And so we have Daniel Craig, having a wonderful time with his southern accent, exposing the culprit in a bewildering tangle of blackmail, adultery, contradictory wills, mysterious footprints in the garden, and a plethora of suspects busily shinnying up and down the second-story trellis. Yes, everybody is having a good time.

Let me add that in the midst of all this rampant villainy, KNIVES OUT gives us a most unexpected pleasure. And that is Ana de Armas as Marta Cabreras, the young caregiver to the murdered man. She’s not just the needed still point around which this mad carousel revolves, but her character is an embattled immigrant, which provides a bunch of not-so-subtle jabs at President Trump.

And yes, she’s a suspect, too. I’m suspicious of her: I suspect that here is a quietly charismatic star in the making.
Posted by John C. Tibbetts at 8:04 AM