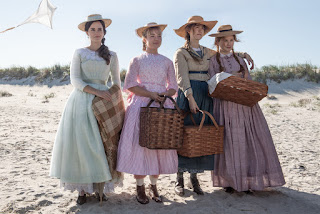 The problem is Jo.

The problem is always Jo.

What to do with feisty, brilliant, restless Jo March?

Louisa May Alcott couldn’t come to terms with Jo. She didn’t want to marry her off. But her readers and her publisher insisted on it. But even though a suitable husband was conjured up, you suspect that Alcott and Jo herself would have none of it. All those sequels about Jo and the kids. Someone else must have written them.

And now the dilemma continues: Who will filmmaker Greta Gerwig cast as Jo? We’ve had Katharine Hepburn, June Allyson, and Winona Ryder... and now enter Saoirse Ronan with a flurry of flounces, jitters, and antic dances. When she settles down for a moment, she turns to the camera and bemoans the plight of women in a professional world. “There’s more to a woman than just a person who loves,” she mumbles.

As much as director Greta Gerwig loves Ronan’s Jo (actor and persona appeared earlier in a film called Lady Bird), you begin to realize she’s not sure what to do with Jo. Solution: scramble the time tense. Regard Jo as a moving target. Begin her story in the present-day and then immediately flashback seven years into the past. Keep her in a slipstream of time and space: One moment, she is an adolescent girl writing her melodramas in the attic; the next instant, a canny business woman haggling with her publisher. Here, she’s at home in Concord; there, she’s moving in to a boarding house in New York. She comes, she goes. Her suitors likewise come and go. Poor Laurie (Timothee Chalomet). The same for the other little women: No sooner do we begin with Meg (Emma Watson), married to a teacher; Beth (Eliza Scanlen), sickly and living at home with Marmie; Amy (Florence Pugh), touring Europe with paintbrush in hand—than we’re hurled back in time to the humble March abode, when the sisters rough-house and perform Jo’s theatricals, run errands to the poor folks next door, and languish for news about their absent father. Beth, in particular, ever sickly Beth, is confounding--alive one moment, dead the next. Then alive again. You suspect she finally expires, impatient to be done with it.

It’s confusing at times. Where are we and when?

I guess there’s nothing really wrong with this game of cinematic musical chairs. The autumnal cinematography by Yorick le Saul is lovely, the music by Alexandre Desplat sprightly and gentle, by turns, and the costumes will earn their own Academy-Award nomination. But I yearned for the characters to just tell their own story rather than be chess pieces moved around willy-nilly in space and time at the whims of the director. Maybe Greta Gerwig, like Jo, had her own reckoning with a producer, who insisted on a reckless piece of time-shifting narrative rather than a good old piece of old-fashioned storytelling.

Ultimately, Joe remains a problem. Her own problem.