A BEAUTIFUL DAY IN THE NEIGHBORHOOD: TABLE-TOP LIFE 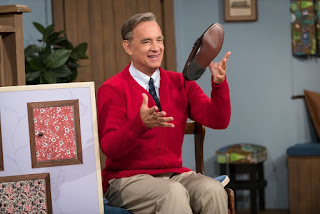 Picture Fred Rogers, alone, in the dark, sitting at a piano. Taping has concluded of a recent episode of his celebrated kids television show, Mr. Roger’s Neighborhood (1968-2001). The crew has left. The set is empty. Rogers sits down at the piano. He absently plays a few notes. . . Then, suddenly, he pounds with both hands the lower register of the keyboard. The dissonant crash is startling. Fade out.

That’s about as close as we get to whatever inner discords mark the otherwise sunny and saintly nature of Mr. Rogers.

(He’s already admitted, earlier in the film, that a two-hand crash on a keyboard helps him cope with life’s troubling realities.)

People attending A BEAUTIFUL DAY IN THE NEIGHBORHOOD may be forgiven their confusion at encountering a story that’s more about a magazine journalist, Lloyd Vogel, assigned to write for Esquire a character profile of Rogers, than it is about Rogers himself. They’ve fallen victim to the marketing of the film which cleverly conceals this disproportion. And that was my own growing confusion—even consternation—as I watched. For more than half the movie we’re caught up with Lloyd’s personal and emotional problems: He’s not happy with his responsibilities as the dad of a new baby and he hates his dad. The movie seems to have jumped the tracks from Mr. Rogers’ table-top neighborhood, which the film repeatedly references, and entered another reality. We ask questions: Do I care about Lloyd’s problems? Wouldn’t I rather know more about Mr. Rogers? Why is this movie keeping us at a distance from him?

How you respond to those questions determines your take on this film. I predict many viewers will begin to squirm, wondering, Where the hell is Mr. Rogers??? Aside from devoted performances by Tom Hanks, a tense Matthew Rhys, and, particularly, the admirable Chris Cooper, the few scant scenes showing Rogers “ministering” to Lloyd’s anxieties and traumas with a handful of homilies about love and forgiveness and a minutes of prayerful silence while dining with Lloyd—and “ministering” properly describes Roger’s delicate counseling of the man—fail to convince. Lloyd comes away redeemed, newly accepting his paternal responsibilities and forgiving his ailing father’s sins.

I’m sorry. I don’t buy it. We never can get close to a saint, says a character early in the film. We have to be content with a few scenes of him playing on the set of his table-top neighborhood, crouching behind his beloved puppets, performing a piano duet at home with his wife (the music is Schumann’s Bilder von Osten), enjoying a serenade on the subway by fellow passengers, and dispensing crooked smiles to one and all. And, oh yes—there’s his visit to Lloyd’s terminally ill father: “I asked him to pray for me,” Rogers tells Lloyd later.

But what echoes in our ears is that crash of notes from Rogers’ piano.

Even in a table-top world, the dissonance is troubling.