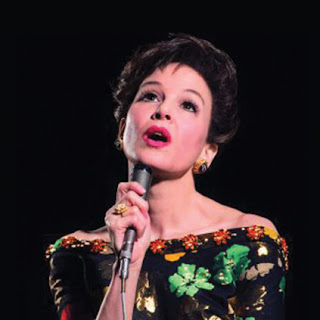 NOT WAVING BUT DROWNING

Recent kudos to Renée Zellweger are well deserved for her astonishing turn as Judy Garland in this harrowing portrait of Garland’s last months during the weeks she spent touring the London theaters shortly before her death.

While paying due diligence to the standard bio-pic formula that requires flashbacks—Judy on the Wizard of Oz set, Judy cowering under the menace of nasty old Louis B. Mayer, Judy wilting under the indifference of her frequent co-star, Mickey Rooney, etc.—the film concentrates on the last, drug-filled weeks when Judy was presiding over the wreckage of her life and career. And I need to say at the outset that I did not watch JUDY as a portrait of Miss Garland. To the contrary, I bypassed the obligatory biographical details and watched it as a portrait of a person burning herself out. That’s drama enough, without worrying about whether or not Renée Zellweger resembles Judy (sort of) or if her voice matches hers (which it doesn’t). No, the more we concentrate on that, the greater the distance we feel from the character.

In other words, freed of that sort of baggage, I found myself wary and nervous in the onscreen presence of this person who only incidentally is calling herself “Judy Garland.” I found myself watching all those tell-tale tics, twitches, and lapses that betray a person losing control. All of us have found ourselves in close quarters with people like this, and we know there is never a moment when we can predict anything or feel comfortable in their presence. To stay with the entertainment industry, for the moment, I myself have spent many occasions in Hollywood with the National Film Society when we catered to the whims of movie stars and hangers-on like this during awards ceremonies and dinner tributes. The hours I spent in the company of Rita Hayworth and Ida Lupino, for instance, bless them!, were not ones spent basking in the glory of their stardom but ones staring into the unstable abyss of defeat and regret.

Credit Zellweger here. This collection of faltering mannerisms could easily have descended into the grotesque satire that Bette Davis gave us in her impersonation of the mad old Mrs. Skeffington in that Hollywood classic. Zellweger, who is, by the way, one of my favorite actresses (check out her early film, The Whole Wide World) has wrought a miracle here—a portrait neither comic nor grotesque; rather, one that enlists our empathy. And one that burrows inside us to evoke our sympathy and wonderment at the extremities of which we ourselves are capable as we flail about, desperately holding off the inevitable darkness.

Recall the wonderful poem by Stevie, who observes a person far out on a lake—

“I was much too far out all my life
And not waving but drowning.”


IS HE WAVING AT ME, OR IS HE DROWNING?