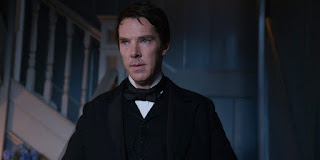 Directed and written by Alfonso Gomez-Rejon, starring Benedict Cumberbatch as Thomas Edison, Michael Shannon as George Westinghouse, Nicholas Hoult as Nikola Tesla.
SWITCH ON!
THE CURRENT WAR may be the most important film of the year. Not because of its clever style and brisk storytelling; not because it features three big-name historical characters—Thomas Edison, George Westinghouse, Nicola Tesla; but because of what it’s about. The late 19th century saw the irruption of forces, scientific, industrial, and social, that changed the world. The fracturing of space, time, and the cosmos that began with Galileo and Newton had arrived.

Every few minutes in THE CURRENT WAR somebody throws a switch. In 1880 Edison switches on his first light bulb. Two years later he switches on the lights of Wall Street. And a year or so after that another switch electrocutes a man in the first electric chair. Meanwhile, industrialist Westinghouse and inventor Tesla hurl electrical current thousands of miles across America to power the dynamos of Niagara Falls and the Columbian Exposition of Chicago. The world blazes with light. But with these new forces unleashed, mankind finds itself perched on the rim of the abyss.

THE CURRENT WAR takes its title from the intense rivalry between inventor-industrialists Thomas Edison and George Westinghouse in the waning decade of the nineteenth century to power the dynamos and light up the world. Edison’s mode of direct current is countered (and outclassed) by Westinghouse and Tesla’s alternating current. Deception and treachery are at hand. Vast fortunes are at stake. And the future of us all is in the balance.

It’s a complicated story and THE CURRENT WAR’s clever mode of storytelling leaves some of us behind. We should have boned up on our history beforehand. Director Gomez-Rejon and writer Michael Mitnick are at the switch. Intimate character sketches and glimpses of vast dynamos flash by. Split screens, flashbacks and a restless camera slice, dice, and puree the narrative. If the screen is always gorgeous, the storyline is occasionally confounding. Thomas Edison connives and maligns Westinghouse. Westinghouse, in turn, gives as good—or bad—as he gets. And in between there is Tesla, flitting from one to the other, holding in his hands the switch that will leave them all in the dust.

Let me throw another switch and digress for a moment. In his memorable account of his visit to the Gallery of Machines at the 1900 Paris Exposition, statesman-philosopher Henry Adams was overwhelmed—“He began to feel the forty-foot dynamos as a moral force, much as the early Christians felt the Cross... Before the end, one began to pray to it; inherited instinct taught the natural expression of man before silent and infinite force.” The Virgin was the force that built Chartres; now, the Dynamo is the force that builds the world.

Is this the end? Is there no more room for spiritual man? As THE CURRENT WAR nears its end, and as a merger of sorts between Edison’s light bulb and Westinghouse’s alternating current creates General Electric, these two titans of science and industry meet by accident at one of the pavilions of the Columbian Exposition. While they talk shop, unnoticed behind them is a modest little Japanese woman bending with brush and ink at her calligraphy. Somehow, we realize, not all the forces at their command can stand against the power and grace in the creations of this woman’s skilled hand.