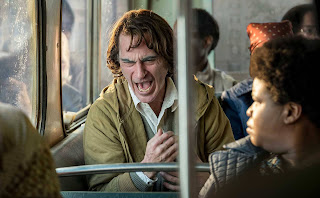 Gotham City has a sound. It’s the grind of several double-bass instruments flailing away in the basement of their registers. And Gotham City has a laugh, a high, maniacal laugh emitted from the throat of a psychopathic killer named Arthur Fleck. In case his name is not familiar, try... Joker.

And Gotham City has a theme. It’s a street sermon delivered with a sledge hammer about the ills of our cities and our citizens—that we are all mad; and that we are all jokers. In case that’s not abundantly clear by the end of the film, we have this amazing scene where the city erupts in flame and riot, and the streets are clogged with jokers, every one of them wearing clown masks. And one of them levels a pistol and shoots the city’s mayor and his wife at point-blank range.

And here’s the irony—we don’t know who that killer is. Is he the Joker? He could be any one of all the jokers (lower case) in the world. To compound the irony, the real Joker makes his escape by clapping on a clown mask over his own hideously clownish face makeup. Double jeopardy.

I think this movie is already in trouble. At least that was the muttered verdict overheard from departing viewers. That grind and that laugh is just too much. Joaquin Phoenix, who is already something of a “joker” in his predilection for bizarre roles, pulls out all the stops, relentlessly laughing until he chokes, tugging up the corners of his mouth at every opportunity, and dancing and capering down streets abd alleyways.

Must we have backstories for all our super heroes and villains? Must we explain away Joker’s sublime villainy with lurid tales of child abuse, a medical condition that produces uncontrolled laughter (it’s called “pseudobulbar”), and so much psychobabble? He emerges before us as just another sick dude. But one with a red nose and green hair.

At least some viewers will have fun registering all the references the movie makes to other movies likewise famous for their bleak, nihilistic tone—like Billy Wilder’s Ace in the Hole on a theater marquee and references to Martin Scorsese’s King of Comedy and Taxi Driver. And all the while, when we’re not listening to the grinding away on those double-bass instruments, we’re hearing soundtrack songs like “That’s Life” and “Smile” (written by another clown, Charlie Chaplin).

And so, at the end, we leave Bruce Wayne, a victim of Joker, standing alone, his slain parents dead at his feet. He now will join the Joker as just another traumatized child with a flair for costumes.

Prologue: A psychiatrist sits opposite a manacled Joker, now incarcerated in the Arkham Asylum. “Tell me a joke,” she mutters. Joker looks up, then whispers, “You won’t get it.”