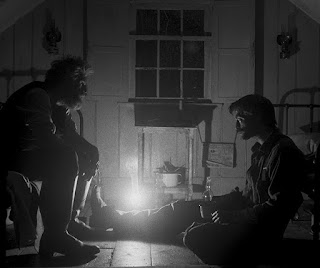 I like THE LIGHTHOUSE, although it is an unlikeable film.

Young Ephraim Winslow (Pattinson) has just come to a remote and windswept lighthouse to assist the grizzled old lighthouse keeper (Dafoe) in his daily chores. There’s thunder in the air. Seagulls daily assault the property. Mermaids disport themselves on the rocks.

And the lighthouse rears up against the tumbling clouds, its circling eye piercing the gloom, endlessly searching... perpetually warning...

THE LIGHTHOUSE is as grim and uncomfortable as it gets. Not just for the two men trapped in its stony entrails but for the viewer, likewise confined to his theater seat, reluctantly unable to look away. We’re all confined. And we get a sense of what’s in store when young Winslow smashes an offending sea bird against the rocks. Disaster will follow, warns his boss. The reference to Coleridge’s “Rime of the Ancient Mariner,” where all hell breaks looks due to the destruction of an albatross, is not accidental; indeed, the dark spirits of other masters of the grim maritime guignol, Edgar Allan Poe and William Hope Hodgson, are constantly evoked. Nightmares and monsters are coming to call.

Take these two men, inexperienced apprentice and grizzled old veteran, lock them into the lighthouse, shake rather than stir, and watch what happens. What begins as a sedately paced account of the daily chores of a lighthouse—hauling the coal up the cliffs, cleaning the cistern, scrubbing the walls inside and out—slowly turns nasty. Storms arrive and repel passing ships. Food supplies diminish. The water goes foul. The two men exchange their good-natured “Yo-yo-ho, and a bottle of rum” sea shanties for insults and knotted fists.

The lighthouse, meanwhile, is hungry. Its platforms, circular stairs, and revolving gears are the teeth and jaws waiting to crunch the men’s bones and swallow their blood. You could typify the entirety of THE LIGHTHOUSE as a deadly case of indigestion.

And pay attention, because as things get worse, master and apprentice seem to exchange identities. Who, now, is who? “Curiouser and curiouser,” said Alice.

And in the end, the lighthouse swallows and spits up on the rocks our young lighthouse apprentice. The sea birds feed on his corpse and tug at this liver. Prometheus is bound.

And we viewers, in the end, are lost, without a lighthouse to guide us home.