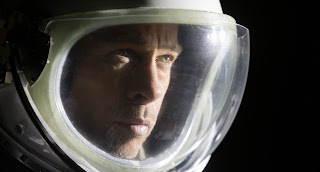 Cinematography by Hoyte van Hoytema and music by Max Richter.

AD ASTRA recalls Judith Merrill’s classic definition of science fiction as “whirling wheels and soft footfalls of thought.” Here, the wheels—all the hardware of rockets and space stations and whiz-bang gadgetry—and the thought—a man’s search for identity—all work together in a film that will disappoint the fanboys of Star Wars but delight enthusiasts of Joseph Conrad’s Heart of Darkness.

Let me explain. Astronaut Roy McBride is on a mission to locate his father (Tommy Lee Jones), who went missing while on a 30-year exploration of life in the galaxy. There is some evidence that dear old Dad might be still alive; that he may have gone insane; and that he may be unleashing Zeus-like power surges that are threatening the very existence of the solar system. Call him “Mr. Kurtz.” And so, like Conrad’s Marlow, Roy provides some interior narration threading through the movie.

Roy spends most of the film adrift in the spaceways, lost in the limbo of his consciousness, and uncertain in the ambivalence of his feelings for the father that deserted the family thirty years ago.

And we viewers find ourselves likewise treading water in a movie whose narrative drive is as slow as Roy’s heartbeat and as (seemingly) random as the course of events. This is not a bad thing. Rather, the aleatory music of Max Richter and the amazing visuals by cinematographer Hoyte van Hoytema sustain our attention. And yes, critics are already all over Brad Pitt’s blue eyes commanding the screen. (No kidding!)

Consider AD ASTRA a cosmic expansion of another crazily-ambitious film by James Gray, the estimable Lost City of Z several years ago. It too involved a father and son’s journey into the “heart of darkness” of the Amazonian jungles. AD ASTRA may look up to the heavens rather than down into the forest primeval, but the search for identity has the same compass heading—True North.