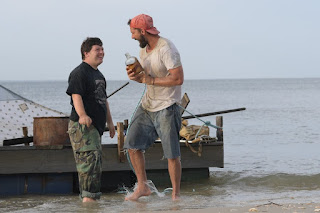 Starring Shia LeBoeuf as Tyler, Zack Gottshagen as Zack, and Dakota Johnson as Eleanor. Written and directed by Tyler Nilson and Michael Schwartz.

Young Zack, a downs syndrome youth, calls himself “Peanut Butter Falcon.” That’s his wrestling moniker and his tribute to his favorite wrestler, “Saltwater Redneck.” And to honor the sobriquet, he smears peanut butter all over his face. There. Let’s get the title out of the way.

My sainted Aunt used to keep fabulous quilts carefully tucked away in an old trunk; and when she would take them out, I was in awe of their crazy patterns, varieties of fabric, and reckless matches of color. PEANUT BUTTER FALCON is like one of those quilts. But when you air it out on the movie screen, you find the stitching is sloppy and the fabrics torn.

And so we have a crazy-quilt story about a thief (Shia LeBoeuf) on the lam from a couple of thugs, a runaway downs child (Zack Gottshagen) escaped from a nursing home, and the boy’s caregiver (Dakota Johnson) anxious to bring him back. And of course, they all end up on a raft floating downriver.

Mix and match these story elements as best it can, PEANUT BUTTER FALCON succeeds best when it’s just content to just let things meander along, like that aimless river. But when the whimsy and caprice abruptly grounds characters and events in coarse-grained reality, the tissue of the story comes apart. There are lapses in continuity and abrupt lurches in tone from comedy to brutal violence (and back again). For example, when the boy meets his idol, the wrestler Saltwater Redneck (Thomas Haden Church), he transforms into Peanut Butter Falcon, dons costume and swagger—and nearly gets his brains beaten out. But this is a cartoon, after all, and nobody gets hurt. Instead, he rears up heroically and throws his opponent out of the ring. Some fun.

At this point, we’re not sure of the patterns of this crazy quilt. We can like it for a lot of reasons, particularly for the fine-tuned performances by LeBoeuf and Gottshagen and the wonderfully textured sense of the rural North Carolina scene. But we come away with a vague sense of unease. We realize the movie tends to exploit Zack’s condition as a downs syndrome child—his slow speech and blunt manner, for example—more for the sake of comedic effects than the poignant and sober reality of his vulnerability in a dangerous and confusing world.