OFFICIAL SECRETS: NOT A BANG BUT A WHISPER 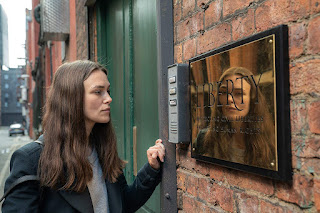 OFFICIAL SECRETS is my favorite movie of the year, so far. Although it begins and ends not with a bang but a whisper, the concussion, while quiet, is deafening.

Here is a model of sturdy, no-nonsense storytelling. It’s quiet, but relentless. Its script brooks no distractions and allows us no relief. The casting is superb, from top to bottom.

It recounts the true story of Katherine Gun (Keira Knightly), a British whistleblower who leaked information about an illegal NSA attempt to extort the UN Security Council into supporting America’s 2003 invasion of Iraq. We know that her efforts and those of others to prevent the invasion failed. There were no Weapons of Mass Destruction. Hundreds of thousands of soldiers and civilians on both sides of the war were slain. And the reputations of President Bush, British Prime Minister Tony Blair, and General Colin Powell were irreparably damaged.

So much is history. OFFICIAL SECRETS teases with what we know, what we think we know, and what we have forgotten.

Meanwhile, Gun, a translator for British GCHQ (Government Communications Headquarters), is having a hard time. Her initial actions were patriotic attempts to forestall the invasion, but quickly she’s in over her head: Her violation of Britain’s Official Secrets Act draws the unwelcome attention of Scotland Yard and British and American security forces, damages her marriage to a Turkish Muslim, and promises a prison sentence for treason. The firm of lawyers she turns to, including Ben Emmerson (Ralph Fiennes), offers little hope, beyond a “guilty” plea and a diminished sentence. The crux of her salvation lies in how the Iraq War is to be judged and defined—Is it legal or is it illegal? And is the document that has crossed her desk an authentic NSA document or a British hoax? The answer to all of this, more precisely, resides in the spelling of one of the words in the memo: The word “favorable” appears in the NSA document; but in its re-release to the public the word is spelled “FAVOURABLE.” So what, you say? The parsing of this spelling riddle will literally spell Gun’s innocence or guilt.

This nicety of British and American spelling is perhaps my favorite part of the film. It’s a tiny scene, barely whispered, and you have to watch closely lest you miss it. Upon such details can hang the fate of nations—and that of a lowly civil servant.

OFFICIAL SECRETS joins the honorable list of recent films—THE POST, ALL THE PRESIDENT’S MEN, SPOTLIGHT, CONCUSSION—that remind us how important newspaper investigative journalism continues to be. In this case, the venerable British newspaper, The Observer, leaps into the fray. As print disappears into the cybersphere in our post-9/11 era, and as readers prefer the computer screen to folded newsprint, we wonder how many stories like this fall between the cracks.

OFFICIAL SECRETS speaks softly, but its message is loud and clear.