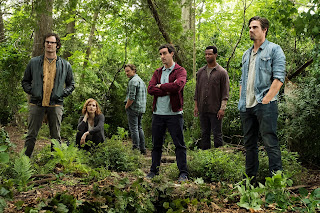 SIX CHARACTERS IN SEARCH OF AN ENDING

I’m riffing on Pirandello’s famous play, Six Characters in Search of an Author, because this sequel to the first half of Stephen King’s 1986 door-stopper of a novel, IT, is searching not so much for an “author” but for an ENDING. In the opening minutes of the movie, director Peter Bogdanovich puts in a cameo appearance and says it all: “All stories need an ending.”

I appreciate Bogdanovich’s urgency. And you will, too, because it’s not long into the movie before you’ll be saying the same thing.

The children of the first film are back, 27 years later—a standup comic, a writer, an interior decorator, a limousine owner, an abused wife, a local historian—now returned to the little town of Derry, Maine, the scene of their childhood terrors. They are called back to confront once again Pennywise the Clown, and all the carnivalesque horrors that follow in his train. Each of these kids has borne into adulthood the literal scars of the traumas of his and her youth. Once members of a self-proclaimed Losers Club, they are still struggling to overcome fears and traumas of guilt, sex, inadequacy, cowardice, etc. In other words, they’ve had a tough time, like most of the rest of us, just trying to navigate adolescence. Chief among these traumas is an incident that triggered the whole thing in the first place, as recounted in the first film—a boy’s guilt over the neglect of his younger brother that led to the little boy’s drowning. Until they can confront and exorcise those terrors the clown known as Pennywise will keep rampaging up and down Derry and, in the process, grow bigger and bigger, like some ghastly Thanksgiving Parade blimp. It’s up to the children—now adults—to literally burst that bubble.

That’s the story’s ending, and it is one devoutly to be desired. It’s been a long search. It’s taken three hours and a multiple number of false endings to do the trick. Including a whole lot of dime-store philosophizing about having the courage to grow up and believe in yourself and all that sort of thing. Meanwhile, comic-book creatures straight out of Creepshow keep jumping out of closets, falling from the ceilings, erupting from the floors. Decapitated heads sprout spider’s legs, tongues shoot out of yawning mouths, and razor teeth chomp and chew everything in sight.

It helps to have seen IT, Chapter One, since the story splits the characters into their incarnations as kids and adults—threading their pasts and their presents throughout the narrative. There’s so much noise and strife in the process. Good heavens, growing up is apparently such an awful business. Watching it through is such an awful business.

I’ve held back on the most awful monster of all, by the way. And that is the weird, gaunt shopkeeper who puts in an appearance halfway through. He is a perfect Horror to behold. And “It’s” name is Stephen King.