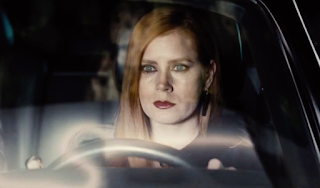 Among the installations in Susan Morrow’s Los Angeles high-chic art gallery are an impaled steer hanging upside down in a glass case, a painting consisting of the word RE VEN GE, and videos of an extremely obese nude dancing women. Susan herself gave up creative work years ago and feels only a distant, numbing connection with her high-class gallery. Her personal relationships are no different. She’s estranged from her mother (Laura Linney) and daughter; she’s given up on the handsome and dashing husband she married and sleeps alone while he’s off on business trips sleeping with other women.

One day Susan gets a package containing the proof of a novel written and dedicated to her by her former husband, Edward. It’s called “Nocturnal Animals,” after a nickname given her by Edward because of her sleeplessness. The rest of the movie consists of scenes of her reading the book, interspersed with scenes from the book and flashbacks of her disastrous relationship with Edward (including the abortion of their child). Finally, the book finished, Susan gets an email from Edward, back in town after many years. She agrees to meet him that night. Upon arriving at a restaurant, Susan sits down, orders a drink, and wait. And waits.

This book called Nocturnal Animals is deeply mysterious. It’s a violent affair about a man named Tony and his wife and daughter accosted by three thugs on a lonely Texas highway, forced to the side of the road, and subjected to brutal taunting and abduction. Left alone in the brush country, Tony reports the crime to a weirdly taciturn detective, Andes (Michael Shannon in an oddly arresting performance). The wife and daughter are found, raped and dead. Andes takes up the case. Suspects are found and interrogated and identified. But when the case is dropped and the men released, Andes and Tony take the law into their own hands. Disclosing that he has terminal lung cancer, he refuses to let this last case get away from him. He and the grieving father take the men to Andes’ house. Andes gives Tony a gun. Andes shoots one of the criminals but the other gets away. Tony goes in search of him, confronts him in a cabin, and in a scuffle, shoots him. Staggering away from the cabin, Tony accidentally shoots himself dead.

This book occupies a central and disturbing place in the larger narrative. It shares a communal identity with both Edward and Susan. Is it Edward’s recriminations against Susan? Is it Susan’s projection of her own guilts? Significantly, as Susan reads the novel, she projects the image of Edward into the character of the protagonist, Tony. And the wife and daughter very much resembles Susan and her daughter.

The last half of the film, NOCTURNAL ANIMALS, shifts freely in time, tense, and multiple story lines. Fictive and real worlds seem to comment on each other; and at times, their soundtracks likewise merge. The collective effect is of characters out of time, place, and identity. The shocking images of the dancing obese woman that open the film, such a pitiless and pathetic indictment of the sterility of modern art, are matched by the final image of the empty, staring gaze of Susan in the restaurant as she waits. . . for what?
Posted by John C. Tibbetts at 10:27 AM