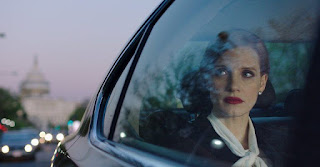 MISS SLOANE is the saddest movie I’ve seen all year. The efforts by lobbyist Elizabeth Sloane to defeat the gun lobby in Congress are as corrupt as the forces arrayed against her. And she is extremely effective, as far as it goes. What is it the Bible says, about “The Wisdom of the Serpent”? Just as her tactics include unwonted surveillance, cynical manipulation, and bribery, the gun lobby is even worse as it stoops to blackmailing a United States Senator into holding an ethics witch hunt against her. It’s a vicious, even deadly tennis match, the political ball batted back and worth, intrigues doubling down on both sides.

Of course, in the balance hangs attempts to tighten gun controls. Conservative critics are lining up to attack its “Hollywood liberal smugness”; and progressive voices are applauding what they see as a brave attempt to expose the chicanery that exists on all sides of the issue. Meanwhile, as the movie makes clear, the reality of rampant gun ownership still is, and will remain, out of control.

Meanwhile, what we can applaud in a bipartisan way is a cracker-jack thriller, a carefully crafted plot that asks you, a la THE STING, to pay close attention, from the very opening shot to the twisty denouement. Even so, I doubt if many viewers can see the switcheroo coming. Sloane herself, in Jessica Chastain’s feisty, tightly-wound portrayal (she wears her lipstick like a scarlet flag), is out to double-cross everybody, both friends and foe. And she freely admits her own motives are hardly partisan. Rather than a passionate concern for gun control, she is motivated more by the will to win, to win something bigger than she’s yet brought off. Her methods are so extreme that we begin to wonder at the end if anything we have seen wasn’t ultimately part of her manipulations, on either side. Certainly she pays a heavy price for bringing down her opponents and the corrupt Senator out to get her. So what, really, has she won?

What has anybody won?
Posted by John C. Tibbetts at 1:02 PM