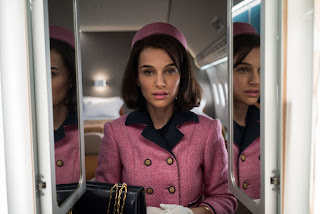 There is a moment in JACKIE when the newly widowed Mrs. Kennedy (Natalie Portman), at her home in Hyannisport, Massachusetts, murmurs, more to herself than anyone else, “I lost track somewhere; what was real, what was performance.” She is looking back on the days immediately after the assassination of the President (Caspar Phillipson). A reporter from Life magazine, Theodore H. White (Billy Crudup), waits, notebook in hand. She is vague at time, almost defiant at others, but always careful to control her image. What should he ask; what can he ask? Can she be quoted; when not? And, in a grim moment of black comedy, he has to ask, what was the sound of that first bullet?

Any apprehension that JACKIE would be a routine, sentimentalized portrait of the life of Jacquelyn Kennedy in the weeks following the assassination of President Kennedy, are immediately dispelled in the opening minutes of the film. The film, like its subject, is restless. While the chain-smoking Jackie wanders, alone and isolated, through the vast spaces of the White House, dressed in a succession of gowns, some of them official, one of them splashed with Jack’s blood, a slipstream of images, past and present, captures those moments of reality and performance. Impressive reenactments include the famous 1962 Valentines’s Day television tour of the White House; the fateful motorcade; Lyndon Johnson (taking the oath of office; Jackie’s television tour of the White House; a performance by Pablo Casals; excerpts of Richard Burton singing “Camelot”; plans and counterplans for the President’s burial arrangements; the spectacular funeral procession; and the many embraces and recriminations, by turns, in exchanges with Bobby Kennedy, Lyndon Johnson, and Jack Valenti. Not until more than halfway through the film are we shocked at the sudden moment of Jack’s death, the sound of the first bullet, the eruption and splatter of his blood, his bleeding body thrown across Jackie’s lap.

As imaginatively presented as all this is, I felt pulled out of it at times by the slathers of mournful soundtrack music by composer Mica Levi. An unfortunate pastiche of Benjamin Britten’s music for Peter Grimes, it lumbers along, relentless, insistent, always tugging at our elbow, as it were. It’s overkill, if you’ll pardon the expression.

Like any attempt to pull the story out of history, JACKIE places us in the sight and hearing of moments immediately following the assassination that cannot possibly be documented. The most egregious liberty, to some, will be the presence of the entirely fictitious Priest McSorley (John Hurt) as he counsels Jackie on issues of faith and doubt. To paraphrase Jackie’s comment, when does the performance capture anything of the reality of those days? Jackie herself in her exchanges with the reporter (Billy Crudup) states repeatedly that the television and print story is more real than the events themselves.
Posted by John C. Tibbetts at 3:00 PM