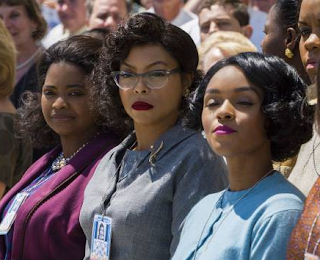 The image you remember from HIDDEN FIGURES, is of NASA mathematician Katherine Johnson racing out of the NASA Research Center at Langley, Virginia, across the street, into an adjacent building, and down a long corridor toward—what? An emergency staff Briefing? No, she is bound for the restroom that is marked for “Coloreds Only.”

While the errand of this African American woman is undeniably urgent, it also tells us a lot about racism in America in the early 1960s, in general, and segregationist policies at NASA, in particular. More to the point, it captures another kind of race going on at the time, NASA’s mandate to put a man in space.

Indeed, the eventual success of John Glenn as America’s first man in orbit parallels the first halting steps—think of Johnson’s run to the bathroom—of America’s long road toward racial justice. Ms Johnson eventually faces the ire of NASA administrator Al Harrison (Kevin Costner) regarding her absences and defiantly points out the absurdity of segregating African-American restrooms. That inequity is immediately adjusted. Would that race relations at that time were more peacefully and equitably achieved!

Oh—and by the way, there is yet another race going on, and that is the deadline for transitioning from the “human computers” that these ladies represent—i.e., mathematics by slide rule and the human brain—to the IBM computer technology to which they must quickly adjust or lose their jobs.

If HIDDEN FIGURES’s Tale of Two Races—and the racial pun is intended—too neatly parallels the racial, social, and scientific anxieties of the time, that is all to the good, as far as I am concerned. This is a superb example of that much-maligned type of film, the “Feel-Good” story. It keeps its focus on Katherine Johnson and her two colleagues, Dorothy Vaughan and Mary Jackson, as they struggle to secure their place in the largely segregated NASA, as well as face social changes in the public and at home. If the details of work life at NASA are tantalizing, yet baffling to most of us, the glimpses of life away from the workplace are welcome and affectionately observed.

We may never have heard of these three ladies, very “real” if until recently “hidden.” Their exploits are documented and impressive, indeed, astonishing. At the same time, I imagine there are many youthful viewers of this film who will reject as too preposterous the details of segregated life—the spectacle of separate seating arrangements, the marginalization of separate living arrangements, separate bathrooms, separate water fountains—not to mention violence in the streets. That aspect of American life in the 1960s is never obtrusive, but all too visibly there, nonetheless. HIDDEN FIGURES is a footrace into American history. And we viewers who have inherited the subsequent victories of social justice, science, and mathematics—with a “finish line” in view, if not yet reached—may comfortably sit back and cheer from the sidelines.
Posted by John C. Tibbetts at 10:48 AM