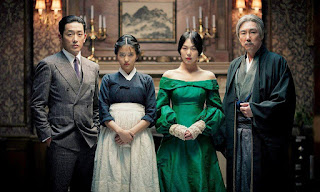 Directed by Park Chan-wook, and starring Kim Taeri as Sooki/ Tamako, Kim Min-hee as Lady Hideko, and Ha Jung-woo as Fujiwara. Based on the novel Fingersmith by Sarah Waters.

This High Gothic thriller interlaces its intertwined plotlines, shifting points of view, and narrative ambiguities with a graphic eroticism and nasty violence that are so finely tuned, you scarcely can separate one from another. It instantly takes its place among my favorite films of this or any year. This line by the poet Robert Browning perfectly describes it: "It is horror added to voluptuousness."

Ordinarily, I prefer to know little about a film before I venture into the theater. What surprises are in store are mine to confront, for better or worse. And at the outset, I can say that THE HANDMAIDEN will embrace those viewers brave enough to emulate my example with edges and enigmas enough for anyone. However, since this is supposed to be my review and commentary, I will have to warn you that SPOILERS lie ahead. Let it be on your conscience if you wimp out and read this or any of the other reviews before you see it. You will deprive yourself of the one of the most surprising and fantastic movies of the year.

Reduced to essentials, the plot is divided into three parts. In the first part we meet a female pickpocket named Sooki who takes on a job as a handmaiden to the beautiful and innocently fragile Lady Hideko at the estate of Hideko’s uncle, a rich old book collector, who intends to marry his ward. Sooki’s real purpose, on the other hand, is to promote Lady Hideko’s marriage to a fake count, who will in turn commit her to a mental institution so that he can claim her fortune. Now, as it happens, the old book collector has a similar agenda of his own. The plot thickens when Sooki falls in love with her victim. The second part is a reverse angle on what we have just seen. Sooki realizes too late that the Lady Hideko is not the fragile innocent she had supposed, but a conniving agent who betrays her. Sooki, not Lady Hideko, is the real victim of a conspiracy: She is consigned to the asylum under the identity of Lady Hideko. The Lady under a new identity escapes with the fake count and the Lady’s fortune. The third part picks up the action after the plot switch. Sooki escapes her prison and rejoins the real Lady Hideko. Now lovers, they turn the tables on their victimizers and contrive to escape with the money.

In no way does the foregoing convey anything of the beauties and complexities of tone and story. What world are we inhabiting? Is it Korean? Is it Japanese? (The action takes place during Japan’s 1930s occupation of Korea; and even the characters, who speak in both languages, are not sure.) Who is Sooki, really? (She goes by other names, like Tamako and Okju). Is it a film noir like REBECCA; a Gothic thriller like GASLIGHT; or simply an exercise for a soft porn display of lesbian sex? What about the weirdly blended music track of Asian and Western styles (much of it could have been lifted from Downton Abbey)? What about entire sequences that take us away from the primary narrative and immerse us into the perverse erotica of books by De Sade? And what about the book collector’s house with its maze of corridors and secret rooms, its layout of stiffly beautiful interiors, and its awful basement that houses a dreadful monster? The answer to all these questions is—YES!

THE HANDMAIDEN is like one of those Russian nesting dolls, each plotline and point of view and contradiction collapsed into one another. You sort them out as you watch, and you must continually check the veracity of what you have just seen against what is now disclosed, and what is soon to follow. Moreover, master filmmaker Park Chan-wook has served up one of the most elaborately sensual experiences you will ever see. A dreamy, freely flowing, but superbly controlled stream of intoxicating images, delicate moments, gut-clenching brutal violence, and a dreamlike fantasy astonish and startle, by turns. We are kept on the knife edge of reality and dream, immersed in incidents both real and subjective. We are fascinated and repelled, sometimes simultaneously.

And so here we are, we viewers complicit with the nasty delights of THE HANDMAIDEN. What must we make of it? To quote one of the characters: “Even listening to the same story, people imagine different things.”
Posted by John C. Tibbetts at 8:28 AM