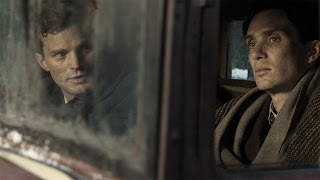 Is the taking of the life of a Nazi monster worth the thousands of lives lost in the reprisals that followed? What is won and what is lost on each side of the ledger? ANTHROPOID raises the question even as it fails to answer it. Indeed, there is no answer. And the protests of critics who seem to want a moral and philosophical debate ring hollow to me. Rather, the film dips our hands in the bloodbath that was Operation Anthropoid and leaves us stunned and baffled.

In 1942 two Czech freedom fighters parachute into Nazi-occupied territory near Prague on a mission dubbed “Operation Anthropoid” to assassinate Nazi SS officer Reinhard Heydrich. This man, third in command under Hitler, was one of the chief architects of the Final Solution. Dubbed “The Butcher of Prague,” his death is nothing less than a gift to humanity. At the same time, alas, killing him also led Heinrich Himmler to order terrible reprisals against the Czech citizens of Prague. History must ask, was the death of this man worth the slaughter that followed of thousands of men, women, and children? How to make sense of it all? The mind recoils at the attempt.

The story begins in December 1941 as the two men gain ground and connect with the remnants of a fading Czech resistance. Plans are considered, reconsidered, and, after a rather tedious delay, carried out. The assassination is a sloppy affair. Heydrich is attached in his touring car, but it takes the man more than a week to finally die of his wounds. As a result, citizens are rounded up and tortured. The assassins retreat to the Karel Boromjeksky Church. What ensues is a grim and bloody sequence as the soldiers lay siege to the church. For hours it’s a standoff as the small band of patriots hold off the surrounding hordes. The church becomes a scene of unremitting chaos. From rooftop to basement, the besieged defenders scramble, evade, and fall, one by one, to the hail of bullets, explosions of grenades, and watery torrents of unleashed fire hoses. A few who hold out for a few more precious moments finally choose suicide with cyanide pellets. I have seldom seen a more grimly effective staging of protracted and relentless violence. It’s a bravura achievement. The editing is razor-sharp, the camerawork agile, and the visceral horrors extremely graphic.

In the end, none of the men are taken alive. As one of the men (Cillian Murphy) faces his final moments, he sees before him a vision of the woman with whom he had enjoyed moments of grace and beauty. She stretches out her hand. He responds—

It’s a curious, jarring break in the action, a surreal benediction, a weird footnote to the carnage that has preceded it. We are left with scant details in the film’s ending titles of the reprisals that greeted the assassination of Heydrich, the only Nazi officer assassinated during the war. We may or may not be satisfied with a film that as an “entertainment” has little to do with comforting us or reassuring us that there are answers or justifications to the horrors of war.