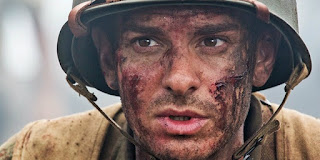 Directed by Mel Gibson and starring Andrew Garfield as Desmond Doss, Teresa Palmer as his wife Dorothy, and Hugo Weaving as his father.

“What do you want of me?” moans Desmond Doss in the thick of the carnage in 1944 as Allied troops attempt to take the Japanese-held escarpment known as “Hacksaw Ridge” on the island of Okinawa. It’s a question and it’s a prayer: “I don’t understand. I can’t hear you.” Seventh-Day Adventist and conscientious objector, Doss questions his own Gethsemane. Later in the film, as his wounded, spread-eagled body is lowered back down the cliff face, an abrupt cut reverses the trajectory and we see his body lifted up into the heavens. Indeed, this is a Mel Gibson movie, and we know the director of THE PASSION OF THE CHRIST is bound to transform this true account of Doss’s heroism into a parable of Christian martyrdom. Indeed, Doss has his own Resurrection, of a sort. He came home and was the first conscientious objector to ever earn the Congressional Medal of Honor, having saved an estimated 75 men without firing or carrying a gun.

The historical record tells us that Desmond Doss was the only American soldier in WWII to fight on the front lines without a weapon. Against the jeers and harassment of his Army comrades, he stubbornly believed that while the war was justified, killing was nevertheless wrong. As an Army medic, he single-handedly evacuated the fallen from behind enemy lines, braved fire while tending to soldiers and was wounded by a grenade and hit by snipers.

He had shipped out in March 1944 with the rest of the 77th Division (the Statue of Liberty Division) for the Pacific Theater, first to Guam, then to Leyte in the Philippines, and finally to partake in the Allied invasion of Okinawa, an island 340 miles south of mainland Japan. The United States invaded Okinawa in order to use the island as an air base for an invasion of mainland Japan, which is only 340 miles away. Japanese forces were deeply entrenched on the island, hammering American troops from caves and tunnels, in addition to setting booby traps. Private Desmond Doss and his battalion were ordered to ascend a jagged 350-foot escarpment called the Maeda Escarpment, which was heavily fortified with Japanese defenders.

Gibson adheres relatively closely to Doss’s story, from his upbringing in idyllic Lynchburg, Virginia, his youthful determination as a Seventh-Day Adventist to never touch a gun, his courtship and marriage, his enlistment and subsequent humiliation and harassment at the hands of his Army buddies, and his heroic exploits atop Hacksaw Ridge to rescue the wounded.

By contrast to the idyllic first half of the film, the second half graphically captures the battles on Hacksaw Ridge with astonishing visceral grit. The shift occurs suddenly, without warning. One moment the troops have successfully climbed the cargo nets erected on the face of the escarpment and are beginning their cautious advance across the corpse-laden battlefield. And the next moment—a savage fusillade of rifle, mortar, and machine-gun fire stops them in their tracks. The screen seems to erupt in a baptism of sound, fire and fury. The bodies of the soldiers jerk like marionettes on the strings pulled by an insane puppeteer. It’s a moment unlike anything I’ve ever seen, not excepting the opening 30 minutes of SAVING PRIVATE RYAN. And it sustains that virtually wordless intensity for fully an hour, culminating in Doss’s astonishing rescue atop the Ridge of the wounded soldiers who otherwise would have been left behind. Despite enemy fire, he quickly contrives a system of ropes to lower the bodies, one by one, back down the escarpment. “Just one more,” he repeats, like a mantra. “Just one more.” Those scenes on the escarpment hold us breathless.
Posted by John C. Tibbetts at 4:00 PM