THE LAST JEDI: FOR GOD’S SAKE DO SOMETHING! 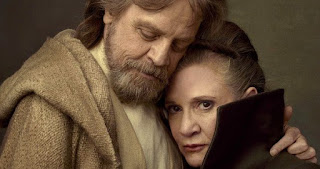 Directed by Rian Johnson. Starring Daisy Ridley as Rey and Mark Hamill and Carrie Fisher as You Know Who.

The last thing anyone needs is my take on the new STAR WARS entry. What follows is just my own selfish need to get a few things off my chest after enduring the damn thing. Yes, enduring what was, for me, a movie which at its core was bland and, well, inert. Forget the plot. I already have. No, I refer to the iconic characters of who exist at center stage, Luke and Leia, whose beloved souls who are no longer with us. Requiescat in pace. Indeed, both are scarcely present in this movie at all. Take Mark Hamil, who spends his time glowering inarticulately beneath the cowl of his monkish robe. C’mon, Mark, say something! Stop galloping up and down the steps of your own little island, running away from Rey, and do something. When you stop for a breath, you can only mutter something about the Stuff that Binds Together the Universe. Lucretius said it better thousands of years ago. And Philip Pullman pronounced it better last week in the His Dark Materials books. Now, I’m the first to admit that at the time of your final face-off, you have a tiny, almost inadvertent great moment, i.e., when after the froth and fury of a deadly fusillade of cannon fire, you remain nonplused, fastidiously flicking an offending bit of grit off your cloak. But that’s about it. Otherwise, you wind up after that only a useless pile of empty clothes.

And take Princess—now General—Leia. Please. Carrie, I’m sad that the script and the filmmakers have given you so little to do. Except merely existing like a useless lump with that hang-dog expression during protracted close-ups of your glum features. I’m not complaining that you’ve grown old—heavens, God help us all!—but you’re Our Princess, and we can reasonably expect more agency from you. And when you exit the planet, comatose from enemy fire, floating up and away. . . I must confess I hoped you would not come back. Why you did come back, considering it would have been a useful exit moment for your character, I have no clue. But because you are back and will presumably return for the next movie, I hope the filmmakers will have the grace not to subject you to CGI immortality but allow you to gracefully fade away into the nether regions of The Force.

Character counts—even in Space Opera. I grew up with John Carter’s interplanetary adventures, and he and Dejah Thoris could teach Leia and Luke a lot: Namely, even if your characters are wafer-thin, you can still do something. In Action Resides Character. Ralph Waldo Emerson said that somewhere. He was a Force in himself.
Posted by John C. Tibbetts at 9:17 AM