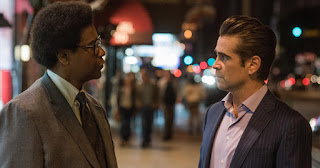 “He was drowning in the shallow end of the pool.” What an effective way to describe the plight of Roman J. Israel (Denzel Washington). Once a dedicated, but virtually penniless idealistic lawyer, ever ready to defend the downtrodden in the Los Angeles criminal court system, he turns a corner and sells out for the big bucks. Which means he leaves behind a cramped little office and a lifelong ambition to press forward a huge class action suit, and finds himself in the offices of a slick L.A. high-rise, working for a slick boss (Colin Farrell). Drowning .

What happened? After being mugged, and his fortunes reaching a desperate low, Roman takes advantage of an opportunity to turn in a criminal on the run. It’s an illegal move, but it nets him $100,000 on the sly. New suits, a penthouse apartment, and a new job beckon. But his left turn into corruption immediately threatens his life when the imprisoned criminal’s stooges seek him out in retribution. Shaken out of his momentary illicit endeavors, Roman returns the money, leaves his apartment, and prepares to turn himself in. But not before he’s shot dead on the streets.

A higher justice? It falls short of the kind of redemptive fable Joseph (Lord Jim) might have written, but it delivers Roman back to the ideals of his youth. But a fatal price.

Although the film tries to do too much in a short span of screen time—Roman’s fall-and rise is abrupt and unconvincing. But thanks to Denzel Washington, who fairly lives in the role, the film delivers something rare in movies about the law—a tribute to those who labor on behalf of the ideals of law and order. While it lasts, the film is gripping and flows at a satisfying pace. And there’s Denzel’s performance of a man lost in the early idealistic years when he was mentored by a legendary champion of the downtrodden—a rather pathetic figure who shuffles along in his rumpled clothes, stuttering nervously, constantly adjusting his glasses, cursed by a motor mouth that constantly gets him in trouble. He’s something of a savant, gifted with a phenomenal memory for legal minutiae, but hopelessly out of place in the more cynical halls of justice. Another actor might have delivered nothing more than a collection of outward tics and eccentricities. But for Denzel, it’s a chance to tamp down his powerful charisma and work instead from within.
Posted by John C. Tibbetts at 12:00 PM