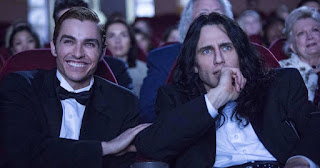 The best short form review of THE DISASTER ARTIST is. . . WHY???

And that’s what I kept mumbling to myself throughout this troubling, even repellent copy-cat movie. Why? Why this movie? Why the movie that it’s based on, The Room? And is this movie-about-a-movie—a movie about the making of a movie—as bad as its reputedly bad subject? Indeed, why are we so fascinated by bad movies in the first place? And should we be fascinated by this movie?

Or should that be the point? Maybe it’s a tribute, or deconstruction, or spoof, or indictment not of bad movies, so much as serving notice to us viewers that we have long since ceased to differentiate—or care—between what is good and what is bad? Maybe it’s not about bad movies as about bad audiences.

The time is 1998. Two participants in an acting class meet and decide they will go to Los Angeles in search of acting careers. After no success in landing parts, they decide to make their own movie. It will be scripted by Tommy Wiseau (James Franco) and will star his buddy, Greg Sestero (Dave Franco). What amounts to a six million-dollar budget produces a movie called The Room that, upon its premiere in 2003, produces gales of derisive laughter that rocks the house. What began as a movie playing in a single theater that made a paltry $1800 has by now become the Worst Movie Ever Made that has to date turned a profit among its cult viewers.

I must say that James Franco portrayal of Tommy is one of the creepiest, even scary roles I’ve seen on screen all year. I kept prodding myself that it’s supposed to be funny, and that the simulations of the Room’s scenes are supposed to be funny. If we assume that Franco’s portrait is spot-on (and according to the side-by-side comparisons of The Room and its look-alike that is indeed the case), then it wasn’t funny at all. And the portrait of Tommy with his lank, shoulder-length hair, explosive outbursts, irrational behavior, and bizarre accent came across as someone dangerous. This is a person teetering on the brink of his own special abyss.

Now, I have since seen some excerpts from The Room. It’s not as gloriously bad as something by Ed Wood. It’s just bland by comparison. I recommend that you watch THE DISASTER ARTIST before venturing into the domain of The Room. That way, you can preserve your own nervous horror at what you’re seeing. And then, after seeing the original, which is pretty tepid by comparison, measure your reactions against the ecstatic responses of its cult followers to the original.

Gus Van Zandt made a shot-for-shot., scene-by-scene reworking of Hitchcock’s Psycho. If the point of that exercise was clear to some (it wasn’t to me), then what are we to make of this A-list movie expending its top talents, budget, and crew in simulating to exact detail something as questionable as The Room? Or, I could ask, is it less legitimate to copy a bad movie than it is to copy a masterpiece?

Inevitably, The Disaster Artist will be compared to Tim Burton’s Ed Wood. Except that the latter film allow us access to the inner melancholy and tragic sweetness of Wood himself. The Disaster Artist keeps Tommy Wiseau at arm’s length. Thank goodness. The only drama here is the very inexplicableness of Tommy, who is so much more bizarre than his movie, The Room. Where does he come from? How old is he? And, above all, where does he get his money? He and his partner, Greg Sesteros, make public appearances to this day. And they’re not telling. Neither does this movie. Foul! I cry. My own answer is that Tommy Wiseau can only be explained if we are allowed to speculate about his extraterrestrial origins. That would make a great science fiction movie, where everybody and everything are Unidentified Flying Objects.
Posted by John C. Tibbetts at 6:49 PM