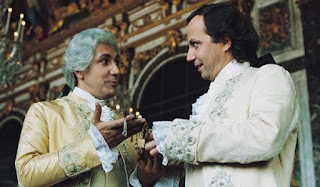 To his The Marriage of Figaro (1784) Beaumarchais appended the subtitle, “A Mad Day.” The play’s conflation into twenty-four hours of the multifarious intrigues, deceptions, and loves of Figaro, Count Almaviva, and Cherubin was no less a “mad” enterprise than the attempts by Edouard Molinaro’s historical film, Beaumarchais the Scoundrel to encompass within two hours a decade in the life of Beaumarchais himself.

The action begins in 1773—a time of “high ideas and low subjects,” as an opening title declares. Louis XVI is waiting in the wings to succeed his father. Art and politics are in ferment. France is “dangerously behind the times.” It is up to figures like Voltaire and Pierre Caron de Beaumarchais “to set the clocks right.”

Well, Beaumarchais (1732-1799) was indeed the son of a clockmaker. But his timing was nothing less than erratic. As the ensuing first fifteen minutes of the film admirably demonstrates, this gentle playwright, philanderer, intriguer, revolutionary, and swordsman led a hectic and complicated life: In a flurry of brief episodes he’s instructing the actors rehearsing his Barber of Seville in the art of naturalistic performance; dashing off a pamphlet to his enemy, Goezman; fighting a duel with a man he’s cuckolded, the Duke de Chaulnes; and cooling his heels in jail on charges of sedition. And so it goes. Beaumarchais accepts it all with perfect equanimity. “I write better in prison,” he says, settling down in his cell to write a new draft of Barber.

And that’s only the beginning! As Beaumarchais connives, flatters, and protests his way through the theaters and courts of Louis XV and XVI, running through litigious intrigues as frequently as he went through wives (and spending almost as much time in jail as out), he seizes opportunities for adventure as a French spy in London and a gun runner to the American revolutionaries.

Meanwhile, his plays help foment a revolution in drama, too. At first, he thinks his Barber is too timid a critique of the monarchy and that perhaps Voltaire was right when he quipped, “Beaumarchais will never be another Moliere because he values his life too much.” Reluctantly, our hero determines to bring back the character of the wily servant, Figaro, in a tougher play. The Marriage of Figaro is an astringent political satire that creates considerable sensation and notoriety. Figaro’s rebellion against his master may be compared, according to the filmmakers—albeit rather simplistically—to Beaumarchais’ own challenge to traditional stagecraft as well as to the institution of the aristocracy. Ironically, in the midst of thunderous audience applause at the play’s premiere, Beaumarchais is sent back to prison. But when the King relents and offers his release, Beaumarchais bargains that he’ll leave his cell only if the King and his attendants attend his play’s next performance.

As improbable, even bewildering as most of it may seem to the uninitiated viewer (who may be tempted to dismiss it as pure Hollywood-style fabrication), the movie does a remarkable job in touching the requisite historical bases. Granted, at best, this densely-packed film can only suggest the complexity of the noisy polemics and endless intrigues, political and artistic, that always surrounded Beaumarchais. Yet, several extended scenes nicely convey Beaumarchais’ windy, legal battles with his bete noire, Goezman; the complex motivations behind his American endeavors (perhaps stimulated as much by a passion for political intrigue and business opportunities as a genuine regard for the American cause); and his ambivalent attitudes toward the aristocracy (wittily conveyed in a number of staged excerpts from Barber and Figaro).

The crazy-quilt episodic narrative structure betrays the scattered nature of its source materials, fragments of Sacha Guitry’s unpublished play; but it is, nonetheless, a beautifully mounted and compelling historical drama with an outstanding French cast. Fabrice Luchini’s Beaumarchais, particularly, is a wryly genial and charming rascal whose rather bland round face is punctuated with sharply peaked brows and dancing eyes.

Even if Beaumarchais was probably not quite the impassioned revolutionary advocating the overthrow of the monarchy and its institutions that the film ultimately suggests—the concluding title declaims, “The great men of this world applauded Figaro, without realizing they were also applauding the birth of the French Revolution”—there was nonetheless enough historical smoke in the factual record to justify and fuel this cinematic fire. (Wisely, the film concludes at this point, omitting the sad ironies of Beaumarchais’ later years, when the Revolution resulted in the destruction of his fine home, a narrow brush with the guillotine, and years in exile as an emigre.)

In the final analysis, Beaumarchais is the perfect subject for a vivid, flamboyant pageant—a veritable succession of tableaux vivants—such as this; a movie worthy to stand alongside other outstanding recent French literary and historical films, like Patrice Leconte’s comedy of manners and politics in the court of Louis XVI, Ridicule (1996); Yves Angelo’s adaptation of Balzac’s Napoleonic drama, Colonel Chabert (1994); and Patrice Chereau’s recreation of the Catholic and Protestant disputes in late 17th century France, Queen Margot (1994). Beaumarchais himself paved the way for any dramatic license in which Beaumarchais the Scoundrel may indulge. He knew how to embellish the dry legalities of his numerous Memoires with irony and wit, his spy missions with dubious accounts of action and swordplay, his comic plays with songs and dance. As one character in the film observes of him, “He’s fond of intrigues, as befits a good playwright.” If he is caricatured here a bit, it is only just, for he himself was a master of caricature. “When my subject seizes me,” he wrote regarding his theatrical endeavors, “I call out all my characters and place them in a situation. . . . What they will say, I know not at all; it’s what they will do that concerns me. Then, when they are fully come to life, I write under their rapid dictation.”

One suspects that had he the opportunity, Beaumarchais might have written just such a scenario as we have here in this film.

The concluding scenes contain delicious moments from a stage production of The Marriage of Figaro. Here are lines like this prescription for success in politics:


“Pretending not to know what you do know, and knowing what you don’t.
Pretending not to understand when you do, and having nonexistent secrets.
Trying to appear profound when you’re shallow.
Putting on acts, hiring spies, and firing traitors.
Tampering with seals, intercepting letters.
Justifying your lowly methods with lofty goals.
That’s politics! Upon my life!”