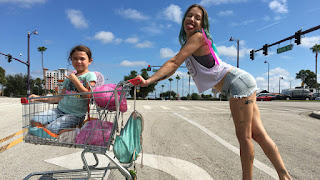 Directed by and written by Sean Baker and starring Willem Dafoe as Bobby, Bria Vinaite as Halley Brooklynn Prince as Moonee

I emerged from a screening of THE FLORIDA PROJECT confused, disheartened, and angry. I couldn’t shake its disorienting effect. The streets and people outside the theater seemed but an extension of the desperate lives and failed hopes on screen.

That’s the powerful, if disorienting effect this amazing film has on the viewer. It’s a story of two “magic” kingdoms in Orlando Florida. One is Orlando’s Walt Disney World; the other is a nearby slum hotel. They counterpoint each other. The first is a shining Cinderella castle of dreams; the second is its garish parody. Cinderella’s castle is a glorious illusion; the motel is the sordid reality behind that shining curtain. Both lie simmering under the blazing Florida sun.

Among the motel’s collection of drifters, drug dealers, and near-homeless are a mother, Halley (Bria Vinaite) and her six-year old granddaughter Moonee (Brooklynn Prince). Mother and child are running wild, from the very beginning of the film, feral creatures in the grip of some sort of desperately manic energy. While the little girl is all arms and legs playing contact sport with the world, the mother is warily negotiating with it. While the child and her little friends wreak damage against the hotel’s power system, sets a nearby abandoned building on fire, and spits and terrorizes the inhabitants, Mom is soliciting the guests of a nearby resort hotel and turning tricks in her room. Presiding over it all is Bobby (Willem Dafoe) a kind and hard-working motel manager who wages a hopeless battle to maintain some semblance of order amidst the surging chaos of the inhabitants.

The steady stream of images, incidents, and fragments of storyline gradually coalesce into a mosaic of mounting dismay and horror. Violence ensues. Halley nearly kills another motel resident who accuses her of prostitution. Police and social workers arrive to take her away and consign her bewildered child to foster parents. The little girl breaks away. She flees to the door of one of her little friends. The moments captured in closeup as she screams and pounds frantically at the door are among this year’s movies’ most agonizing moments. She and her friend escape the motel and bolt through fields and across busy streets to the nearby Disney Magic Kingdom. Desperately, they thread their way through the parking lot and the crowds of thronging tourists. Ahead looms Cinderella’s Castle. They run and run. And then, abruptly, brutally, the screen goes to black. Not even the magical fantasy of Disney can help them now.

Like Sean Baker’s breakout film from a few years ago, Tangerine, THE FLORIDA PROJECT is so real and so vibrant that it hardly seems to be a movie at all. The children, in particular, seem absolutely themselves, not the fabrications of direction, camera and script. Contrasting Dafoe’s stoic and sturdy manner (one of his very best performances) are the amazing portrayals by newcomers Bria Vinaite and Brooklynn Prince as mother and child. So raw and seething are their roles, I can hardly fathom how they could have been achieved, ironically, by seasoned actors. There’s not a shred of contrivance here, only a raw authenticity that is unschooled and unvarnished.

Both Magic Kingdoms fail their occupants. Both are only a ground zero, a dead end. Cinderella’s Castle is as hollow and useless as its motel counterpart. Viewers of faint heart and cozy fantasies should stay home. Which is a pity, since this is one of the very best movies of the year.