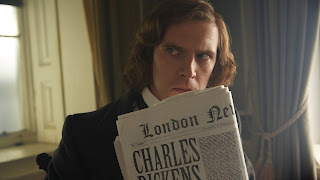 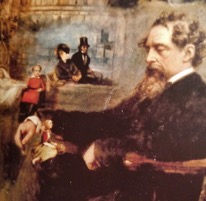 THE MAN WHO INVENTED CHRISTMAS takes its cue from a famous painting by Robert William Buss, “Dickens Dream,” painted in 1870, around the time of Dickens’s death. It shows Dickens in the chair of his study, surrounded by the dream-characters of his novels. The movie likewise surrounds Dickens with his imaginary creations during the throes of his writing A Christmas Carol. This sort of psychic drama can be a tricky thing to bring off, wherein whimsy all too often turns into muddy pretentiousness; but on the whole, THE MAN WHO INVENTED CHRISTMAS brings it off, not least due to the whimsical impersonations by the cast members of the imagined characters in A Christmas Carol.

The year is 1843, and after the relative failure of his recent novels, Martin Chuzzlewit and the travel book, American Notes, the 31-year old author is facing a serious slump in his career. With the celebrated Pickwick Papers and Oliver Twist already behind him and David Copperfield and Great Expectations yet to come, the need for a comeback compelled by a growing family and accumulated debts is pressing and immediate. And so begins the creation of what would become his most famous book, A Christmas Carol. It celebrates for all time a Christmas that is not so much a solemn religious observance but how we know it mostly today, a festival full of Pagan festivity and charitable brotherhood. 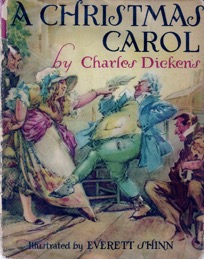 Visualizing the creative process on film is a really dangerous business. How do you penetrate with the camera something so mysterious as the imaginative impulse? Now, as actor Simon Callow, who appears in the movie briefly as Dickens’s illustrator, John Leech, once told me, this is a near-impossible task. In the instance of writing, what can you do, he admitted, when all you have is a person sitting silently in a chair, with pen in hand, a piece of paper before him?—Shoot closeups of the scratching pen? Cut to the writer’s wrinkled brow? Track the words spilling across the page? Etc. Indeed, any moment of creation is essentially sealed off from the probing camera. Isn’t it?

The Man Who Invented Christmas resorts to a kind of meta-cinema. As Dickens prowls the streets and records images and incidents and scraps of overheard dialogue, their imaginative correlatives--Marley, Scrooge, Cratchit, Tiny Tim, the Three Christmas Ghosts—spring to life. The world is his storybook and he is merely their auditor. The characters crowd into Dickens’ study; and soon they beleaguer the poor writer with advice, sometimes helpful, sometimes not. “You are the author of this story,” suggests one of them with a sly wink—“aren’t you???"

It’s almost as if Pirandello had taken a left turn from his Six Characters in Search of an Author to A Christmas Carol.

I must confess although there is some charm and wit in this business, I’m a bit uncomfortable with it. Like most creative artists, Dickens didn’t always depend solely on the immediate world around him for direct inspiration. The processes of his writing must have been far more mysterious than that. In some unfathomable fashion, his work came from within. For example, some of his other Christmas stories didn’t depend upon the thronging streets of snow-bound London; rather, he wrote them amidst the sunny climes of Florence, Italy.

But I digress. With a deadline of just six weeks, Dickens has not only to contend with the demands of his phantom characters, he has to put up with the unwonted interruptions of family and professional life, the demands of his creditors, of his children, the intrusion of his neer-do-well father, and the prospect of yet another baby on the way. Moreover, a series of nightmares are plaguing him. They take him back to his dreadful boyhood, when the abandonment of his father forced him to work grueling hours in a London blacking factory. Writing A Christmas Carol reawakens forgotten traumas of a blighted childhood—traumas that would never entirely leave him but would remain unknown to the general public for many years.

But Dickens slogs along and at length comes to the moment when Tiny Tim has died, and the third Ghost takes Scrooge to the graveyard. Full stop. Dickens has insisted Tim must die. And Scrooge must remain unrepentant. Any happy endings and overnight conversions would never do. But a chorus of protests assails him, from characters and family members alike. Even the young Irish maid protests. Dickens holds firm. Things are at a standstill. Only a personal epiphany resolving conflicts with his childhood and with his estranged father will break through the impasse and bring Tim back to life and Scrooge to his redemption.

Am I so cynical to consider that Dickens’ had a point; that maybe his initial instincts for a downbeat ending—at least as the movie tells us—were right?

In closing I greatly admire THE MAN WHO INVENTED CHRISTMAS for its concentration on the novel and the characters of A Christmas Carol. And not, ironically, on this business of movie adaptations, of which there have been confoundingly many. Here, viewers have the opportunity to learn about the book, after all. Indeed, I’d like to think this movie proclaims an essential truth of the matter:

It’s time to READ THE DAMN BOOK. On its own terms.