DIPLOMACY, Directed by Volker Schlondorff. Adapted from a play by Cyril Gely. 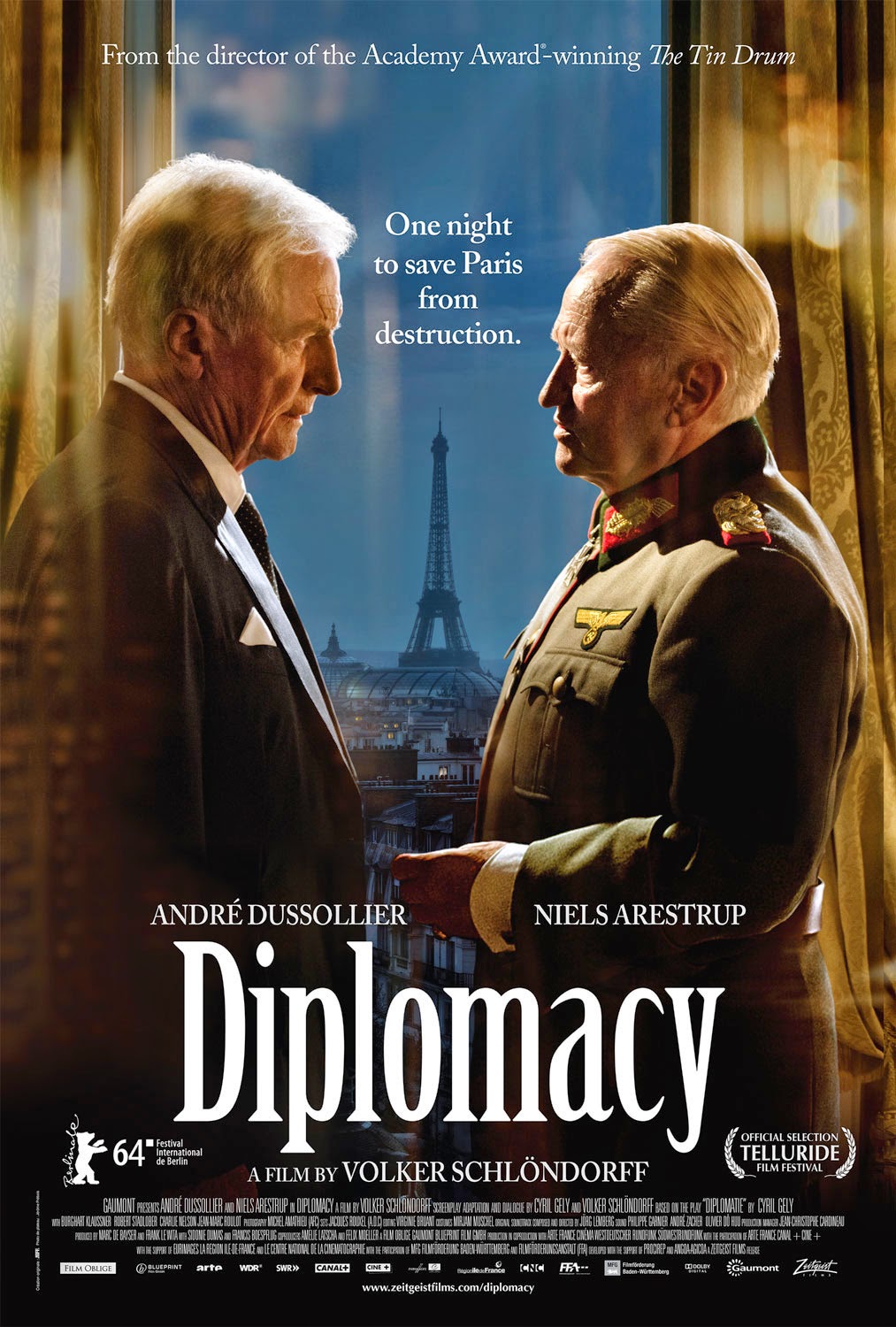 A new film by the great German director, Volker Schlondorff (Young Toerless, Swann in Love, Circle of Deceit, The Tin Drum) is always cause to celebrate. And here is Diplomacy, a taut interior drama about a very large subject, i.e., the imminent destruction of Paris as the Nazis pull out under threat of Allied invasion.

General Choltizt (Niels Arestrup) has been ordered by Hitler to carry out a carefully designed plan to detonate a network of bombs that will not only reduce much of Paris to rubble, but will cause the flooding of the Seine that will complete the mass destruction. As the target date and time approaches, we find the General alone in his office, overlooking the dawn coming up over the city. Unexpectedly, a Swedish diplomat, Consul Raoul Nordling (Andre Dussollier) appears in his quarters. Neither a soldier nor a partisan of either Germany or France, he inveighs against Coldtitz to change his mind and disobey the order. The General, at first, is adamant. He is a professional soldier who always obeys orders. Moreover, we learn as the debate ensues, that Hitler has recently bolstered his order with the threat that if the General disobeys, his family will be executed. “What would you do if you were in my shoes?” he demands of the Consul.

Momentarily taken aback, the Consul counters with a plan: He will contact friends who will guarantee the General’s family’s safe passage to safety. Sensing the General weakening, he presses the point.

Meanwhile, the German bomb squad is in place, waiting for the General’s order.

Well, we know, of course, that Paris was not destroyed. The suspense here is in wondering how the General came to countermand the order. . . and if he does so, what will happen to his family?

Now, there is a peculiar tension to all this. The consul is a crafty—actually, a strangely mysterious character. Why is he here? Just as a non-partisan, he says at first. But gradually, it becomes clear he is determined to try to change the General’s mind. He seems to know lots of things about the General. He has contrived to enter his rooms by means of a secret back stair that no one but he knows about. A hundred years ago, he explains, Napoleon III had it built so he could surreptitiously visit a mistress. Moreover, he reveals at length, he has been positioned behind a two-mirror that has allowed him knowledge of the General’s movements and plans.

Finally, at the last moment, the General countermands the order. The Consul assures him his family will be safe. Exhausted, the General slumps to his chair and takes out the pistol from his desk drawer. But no, he joins his men and surrenders to the Allied troops.

Epilogue. A few titles inform us that the General and his family were not prosecuted. Indeed, years later the Consul met with him and gave him the medal he had won for saving Paris.

True story? Not exactly. Apparently this overnight encounter never happened. See Rene Clement’s Is Paris Burning? (1966) with Orson Welles as Nordlling and Gert Frobe as Choltitz for a rather different spin on how Paris was saved by General Choltitz from destruction.

But about that back stairway. . . Was that an invention of the playwright? And consider how important it was that it was a secret passage that gained the Consul entry to the General. The Consul’s arguments, like that stairway, were a stealthy intrusion upon the General’s implacable determination. Gaining entry, like disrupting the General’s orders, was a hidden strategy that breached not just the room but the General’s orders.

Diplomacy is exactly what the title implies. And it is carried out in a small room with two men, portrayed here by two fantastic French actors, feinting and dodging, back and forth, before ultimately capitulating. It is a chamber drama, to be sure, but Schlondorff keeps his camera in motion and the action moving forward.