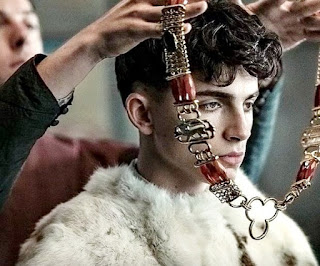 The sight of Timothee Chalomet as the lovestruck Laurie in Little Women hardly prepares us for his blood-spattered King Henry V in the new Netflix production, THE KING. But his dark-eyed intensity is the same, even if his force of arms is wielding a broadsword against rival Percy Hotspur rather than hugging the reluctant Jo March.

The story of the warrior King Henry V and his exploits at Agincourt in 1415 come to many of us via the play by William Shakespeare and latterly the films of Laurence Olivier and Kenneth Branagh. We know that young Henry reluctantly assumes the throne after the death of his father, Henry IV. He now must abandon his days of drinking and wenching, ignore his former drinking buddy, Sir John Falstaff, take up arms against the blood-lusting Dauphin of France and his superior forces and, even more dangerously, negotiate a marriage to Catherine de Valois

But now, the historian has his or her say. The backdrop is late Medieval England during the Hundred Years War between England and France, when Henry V was the second English monarch of the House of Lancaster, and England became one of the strongest military powers in Europe. There is a decidedly downbeat cast to it all. Here, we have history at close quarters—with no quarter given. For all its expanse and scope, it’s lowdown and dirty. Vulgar invective replaces Elizabethan soliloquy. Grinding poverty stains pomp and heraldry. When combat is not waged from a safe distance, with catapults and longbows, it is nasty business at close quarters, where it’s largely a question of trying to stay on your horse while bashing away at heavily armored foes. Everything and everybody ends up down in the mud, where there is little to distinguish English from French, friend from enemy. No medics attend the wounded. A finishing sword stroke is the only compassion, the only remedy. Politics, then, as now, consists of the mantra, “Trust No One.” Patriotic fervor and King Henry’s war was in reality a fraud and a land grab.

Timothee Chalomet’s King Henry is boyish and impulsive, and we are reminded that the historical king was barely twenty when he came to the throne and only thirty-five at his death. His friend, John Falstaff, is not the bloated caricature of Orson Welles but Joel Edgerton’s wise and canny drinking buddy-turned battlefield advisor (who depends upon the pain in his right knee to predict impending rains). Fairly stealing the show is a barely recognizable Robert Pattinson as the Dauphin of France. In a key scene, this blond, sniggering creature delivers a jaw-dropping taunt to Henry. It belongs in a highlight reel—but not for the faint of heart. His own demise is a startling pratfall.

Watch for Oscar nominations all around—and kudos to Chalomet who, like Henry, is a star on the ascendant.