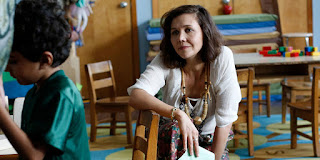 HOMEWORK AFTER HOURS
I must confess a film with a title like THE KINDERGARTEN TEACHER might not have attracted me had it not been for the presence of Maggie Gyllanhaal. Since she is known for her brave performances in rather eccentric roles, so I gave this a look.

The rewards, for me at least, were many—not the least of which is her performance of a woman’s descent into madness... Never has a destructive obsession been so quietly, even tenderly observed.

At first, we see Lisa Spinelli as a quiet and caring teacher, patiently teaching her young charges their alphabets, playing them classical music during rest periods, and always attentive to their playground games. One day she overhears young five-year old Jimmy (Parker Sevak) reciting words that seem to be some kind of poem. She writes the words down. They are disarming in their unselfconscious simplicity. While Lisa is not a poet herself—her poor attempts in a night class she is taking elicit only polite interest from her teacher—she is sensitive enough to realize she has a young, even precocious talent on her hands.

Lisa decides to recite those lines to her night class. The praise from teacher and students is immediate and enthusiastic. Gratified, she claims them as her own. Eagerly, she waits for the little boy to produce another set of lines. Again, she writes them down, and again she recites them to the applause of her writing class.

She begins taking the little boy out of the classroom at times, into the bathroom, out to the playground, in search of a quiet space where he can tell her more of his poems. She never raises her voice. She is always quiet and tender. But it is obvious she needs something from him. And it is apparent that her mentoring is becoming manipulative. She is, in short, dangerous. She contacts his parents, pressing them to encourage his talent. Too often, she says, the world stamps out such promise. Jimmy is like a young Mozart, who must be allowed to realize his gifts. She is right about that, of course. But she decides she is the one to nurture him. At all costs.

Things are going downhill with Lisa. Soon, she is calling Jimmy at home on the telephone. When her writing teacher finds out she has been passing the boy’s poems off as her own, he throws her out of the class. He attacks her for exploiting and preying off the work of others. The boy’s father grows alarmed and transfers him to another school. At home, Lisa’s family life is unraveling. They care nothing about the arts, she declares; they are only pathetic and common...

Packing her bags one day, she slips out of the house and follows Jimmy to the playground of his new school. Crouching outside the fence, she entices him to leave with her for a trip. Where are they going? He asks. She drives on.

We watch, considerably alarmed, as she takes him swimming into a nearby lake. She hugs him to herself as he bobs up and down in the breakers. She takes him to a hotel. She tells him they will go away together and publish a book of his poems. The boy, who has passively accepted all this, now realizes something is very wrong. He locks her into the bathroom and calls the police. From the other side of the locked door, Lisa is resigned to her defeat. She calmly issues instructions to help him call the police and give them their address. It’s as if she is watching herself doing all this, complicit in it, only mildly alarmed at her own behavior. There are no rants, no attacks. She is just a sad, sad woman, eyes hidden behind sunglasses, a hint of a bewildered smile on her lips. Out of her obsession to protect and nurture—all of it supposedly out of her passion for Art—she is destroyed and perhaps so is the boy.

The final scene is devastating. The police arrive. The boy is taken to the car and locked in. From inside, we hear his still, small voice: “I have a poem,” he says. “I have a poem.”

But now there is no one to hear him. No one to listen. His fragile genius will surely wither away in an indifferent world. Lisa has been right all along. But she is lost in the darkness of the final fade-out.
Posted by John C. Tibbetts at 8:31 AM