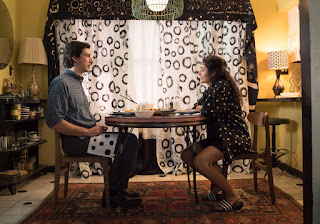 Directed by Jim Jarmusch, starring Adam Driver as the bus driver Paterson and Golshifeth Farahani as his wife Laura.

PATTERSON is a quiet miracle. Writer-director Jim Jarmasch has fashioned a gentle and poetic evocation to a decent city and its people.

One day while walking home from his daily work as a bus driver in Paterson, New Jersey, Paterson (for that is also his name) stops to listen to a poem written by a 10-year old girl waiting for her mother. “Water falls,” she recites, reading from her little notebook, and the simple lines compare falling water to hair falling across her shoulders. “That’s good,” says the admiring Paterson.

He should know. He too is a poet. While waking up over his bowl of Cheerios, while driving the bus, during his lunch breaks, down in his workroom, he thinks about his own poems tucked away in his own notebook. His words, halting and tentative, limn themselves across the screen as he thinks and writes. And if the little girl’s poem sounds like William Carlos Williams, well, then Paterson greatly admires William Carlos Williams. And Paterson the town was once the home of William Carlos Williams. Not that the city boasts of the fact. Rather, another local celebrity, Lou Costello, is privileged with a park and a statue.

But the whole of PATERSON is like a poem by Williams. It celebrates the details and simple incidents in the daily lives of the citizens of Paterson. There’s the local bar owner who plays chess against himself, the lovelorn barfly suffering from unrequited love, the bus manager with his daily recitations of woes, the rapper declaiming in the laundromat. Paterson’s daily routine itself is like a poem, a litany, as it were. He rises in the morning, checks his watch, kisses his wife, eats his cereal, arrives at the bus station, listens to the small talk of the passengers, arrives back home, straightens out the tilting mailbox, and exchanges quizzical glances with Marvin the pug dog. His wife, delicately portrayed by the lovely Golshifeth Farahani, bakes cupcakes for the local farmer’s market and sings “I’ve been working on the railroad” with her new guitar. She decorates her life: She decorates the cupcakes, the guitar, her dresses with an odd black-and-white motif of white circles against a black field.

Nothing much happens in Patterson, New Jersey. There are no big events and conflicts in the town and in the movie, just quiet moments that come and go, hardly noticeable, but cumulative in their collective power. But there is this odd way that the film rhymes itself. By that I mean incidents have a way of repeating themselves. A chance remark by Laura to Paterson about maybe having twins someday is echoed in later moments when twins arrive in Paterson’s bus. The little girl’s “Water Falls” poem repeats itself in moments at the city’s water park. Laura’s dark, rather exotic beauty finds its counterpart in the movie she and her husband attend one night, ISLAND OF LOST SOULS, with its “Panther Woman” character. And while the quiet, rather stoic Paterson himself is something of a cipher, we remember the picture of him in a Marine uniform at the moment he disarms the lovelorn barfly after a lover’s spat.

Sometimes a miracle will find its way into the quiet streets and rundown shops of Paterson. They don’t announce themselves with a shout or with shafts of heavenly light. They just come and go, while we’re not looking. One day, while Paterson is sorrowing over the loss of his notebook (Marvin the dog ripped it up one night), he sits disconsolately on a bench in front of the waterfall. A little Japanese man in a business suit sits down next to him. He carries a satchel of notebooks. He asks Paterson if he writes poetry; if he likes William Carlos Williams. And then he gives Paterson one of his notebooks. It’s pages are blank. Paterson thanks him. Renewed, perhaps he will write again. The little man, meanwhile, departs, bound, he says, for Osaka.

From Paterson, New Jersey, to Osaka, Japan. Try to connect those two.

You can do it, but only in a poem.