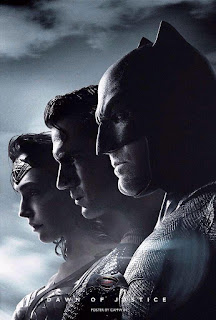 Although it’s a long slog before Wonder Woman shows up, it’s almost worth the wait. Here she is, joining Batman and Superman in battle against the ugly Kryptonite Monster. The memorable moment goes like this:

Okay, guys, settle down. it’s a mystery where she came from and why she’s here. I couldn’t figure it out, either, but wow, she looked great! As Alfred, Batman’s faithful butler (Jeremy Irons) says, “How to explain it???”

Of course, there’s enough pummeling and pounding to go around. It’s the most tedious trope in the Super Hero Universe, why they keep bashing on each other, when there’s never any apparent ill effect.

Meanwhile, another favorite trope asserts itself, and that’s the intrusion of numerous television newscasters to comment on the scene, like Anderson Cooper, Wolf Blitzer, Andrea Mitchell, etc. They keep popping up, film after film. I keep wondering where the hell the Fox News pundits are? Where are Sean Hannity, Chris Wallace, and, above all—where is Megyn Kelly? Perhaps they’re waiting in the wings, ready to join the ranks of the Super Villains.

The only compelling drama in this film is the suspenseful wait for Mad Magazine to launch a suit for plagiarism against the film. Those of us with long memories will recall the fourth issue of Mad (April-May 1953) when the brilliant Harvey Kurtzman and Wally Wood produced "Superduperman," where Superman and Captain Marvel (here named “Superduperman” and “Captain Marbles”) duke it out. Superduperman is unable to harm Captain Marbles until he provokes Marbles into punching himself in the head. 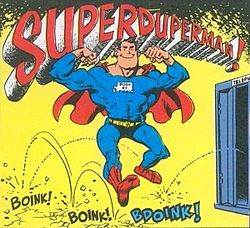 I can hear Sup’s bouncing boing and boink now. . .

There’s nothing much else to say, except that there’s a fleeting quote on the soundtrack of a waltz by the great Russian composer Dmitri Shostakovich. Now THERE was a genuine super hero!