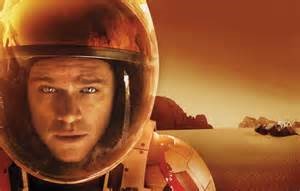 When John Carter stood on the rim of an Arizona cliff and held out his arms toward the Red Planet, he was yearning to “go home.” Now, in the new Ridley Scott Martian Odyssey, The Martian, astronaut Matt Damon stands on the sands of Mars and also yearns to “go home.” The trajectories have switched. In little more than a century, from Edgar Rice Burroughs’s A Princess of Mars in 1912 to Scott’s The Martian in 2015, the concept of “Home” has changed.


Going home to Mars was one thing; now we’re already coming back home to Earth.

And this on the same day that NASA has announced a promise to have a man on Mars by the early 2030s!

Has Mars already lost its allure, that we’re more concerned with returning than going?

At least The Martian, regardless of its trajectory, is as whole-hearted an endorsement of faith in progress and faith in humanity as any film we’re likely to see all year. No apologies, no qualifications, no doubts. Seat-of-the-pants Ingenuity, stubborn persistence, and good old knowhow win the day. Matt Damon’s stranded astronaut is a latter-day Robinson Crusoe, alone and surviving by his wits. “To dig, to bake, to plant, to build,” wrote Virginia Woolf of the Defoe classic, “—how serious these simple occupations are; hatchets, scissors, logs, axes—how beautiful these simple objects become!” Never have the basic actions of breathing, eating, and coming and going been so carefully itemized, so vividly depicted. Our castaway Robinson Crusoe scaled down his world to its essentials. And now Matt Damon has to do the same, albeit with tools considerably more advanced that what was available to Crusoe.

Leaving Home and coming Home are merely two sides of the same compass course. Maybe The Martian will encourage a return to John Carter’s perspective. Maybe, ironically, it will “bring home” to us the necessity of going there...