Poor John Ruskin. The renowned 19TH-century art critic and historian can’t catch a break. In MR. TURNER, he comes across as a haughty, pontificating, simpering jerk. Now, in EFFIE GRAY, he’s a cold and heartless pedant incapable of human love. Think of, respectively, the foolish scholar Mr. Casaubon in Middlemarch and the chilly tyrant Mr. Murdstone in David Copperfield.

Adding insult to injury, check out the advertising in the latter film: his image is absent, supplanted by actresses Dakota Fanning as the titular Effie and producer/actress Emma Thompson as her kindly and sympathetic friend, Lady Eastlake...

It’s as if the once-celebrated Ruskin (1819-1920), the most influential critic and art historian of his day, unequalled master of prose, skilled draughtsman, prominent social thinker, educator and philanthropist, and champion of J.M.W. Turner and the Pre-Raphaelite painters has been rudely erased from the public record. How ironic, therefore, it is that the most celebrated image we have of him was a full-length portrait painting executed in 1853 by the very man who later married Effie and had eight children by her. 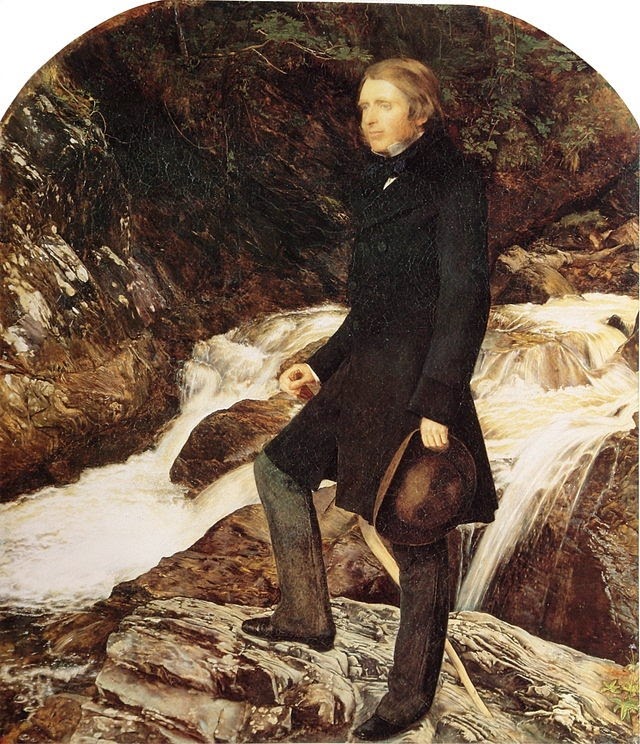 All we can glean today, apparently, in the first instance, is that his support of Turner and the Pre-Raphaelite movement was a corrupt and opportunistic posture; and, in the second, that he was an impotent monster who subjected his young wife, Effie Gray, to six years of a loveless marriage, leaving her a virgin before the marriage was annulled on grounds their sexual union was never consummated.

Far be it for me to defend Ruskin on these particular issues. On that score, much controversy remains as to what exactly happened on the Ruskins’ wedding night and subsequent weeks and months. Was Ruskin impotent at all; or, as biographer Wolfgang Kemp wonders, was he privately appalled at what he felt were the ”base” realities of a woman’s menstruation and body hair; or was he going to inordinate extremes to avoid the risk of pregnancy? The most carefully balanced and fair-minded assessment of the situation can be found in Suzanne Facence Cooper’s admirable novel-length study, Effie (2010), the nominal basis for the film. More questions surround the circumstances of the marital split: Was Ruskin taken by surprise when Effie sued for an annulment, as this new film proposes? Or did Ruskin himself stage-manage the split by none-too-subtly throwing Effie into the embrace of his Pre-Raphaelite friends, hoping to avoid personal embarrassment and sue for divorce on grounds of her adultery, as in the BBC series, DESPERATE ROMANTICS. (The fact remains that at the annulment she was indeed pronounced a virgin.)

What’s hard to understand on all counts is how a person of Ruskin’s humanitarian efforts, critical stature, and worldly sophistication—yes, sophistication—could have been either so confused or so stupid or so cruel as to find himself in such a wretched society scandal.

Meantime, I wonder at my own naiveté in suggesting that Ruskin should be remembered for other things. Examine his strange and troubled childhood, which transpired under the sternly manipulative and possessive control of his parents. Consider: If his gaze at women and marriage was wary and sometimes averted, his regard for Nature was unflinching. He launched an important aesthetic charge in demanding that the artist of the day get his head out of the clouds and cultivate “an attentive gaze [that] would reveal in every object the most varied facets and subtle gradations of motion and form. To perceive this was a science in itself, a science prior to aesthetics and to any kind of theoretical exercise. “ As a teacher at Oxford he tried to integrate practical and theoretical art studies. He was a champion of the working class and preached a “gospel of labor”; as a privileged person of independent wealth, he demanded direct social action from those high on the social hierarchy; and single-handedly he wrote a monthly newspaper for more than a decade addressed to the “Workmen and Labourers of Great Britain” (which became his book, Fors Clavigera). And almost alone among his contemporaries he sounded the alarm at the imminent neglect and destruction of the world’s architecture and art treasures by the mechanical push of the Industrial Revolution. His book The Stones of Venice, was a “desperate last-ditch effort to defend and preserve the past against the destructive tide of the present.”

Yes, none of the above makes for the sort of blood-and-thunder gothic thriller, or perversely compelling character study the movies prefer. Admittedly, if any more Ruskinian movies are to come, there are other personal irregularities on erotically pathetic display in Ruskin’s unfortunate relationships with other child-women, before and after the affair with Effie Gray. He joins his countrymen William Hazlitt, James M. Barrie, and Lewis Carroll in that regard. We can only turn away, in dismay, or, at the least, a measure of compassion.

But can we not give the man this due? Can we not afford some respect the person who once cried out: “The worst of me is that the Desire of my Eyes is so much to me. . . To see clearly is poetry, prophecy, and religion—all in one.”
Posted by John C. Tibbetts at 8:25 AM