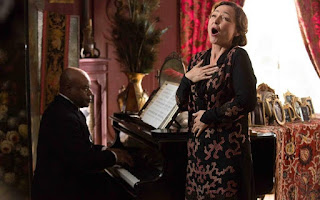 Directed by Xavier Giannoli and starring Catherine Frot in the title role and Denis Mpunga as the butler Madelbois.

You come away from the French serio-comedy, MARGUERITE, with the uncomfortable sense that “artistry” is not what really constitutes Art. Rather, it’s “heart” that drives Art. Hardly a novel idea, but I’ve never seen it better conveyed than in this magnificent tribute to a wealthy French aristocrat whose unsteady voice betrays the demands of operatic performance, but whose sincerity of purpose and sheer love of opera overrides her mortal failings and transcends opera itself.

Loosely based on the real-life character, Florence Foster Jenkins (whose biopic is soon to come at the hands of actress Meryl Street and director Stephen Frears), MARGUERITE recasts the story into the early 1920s and the personae of the baroness Marguerite Dumont and her faithful butler, Madelbois. Marguerite has won a close circle of supporters and music lovers—not by dint of her singing voice but through the generosity of the money she contributes to the War Effort veterans. Who could dispute a cause as important as that? And as long as her audiences are limited to that select coterie, her singing goes challenged. But when she takes it into her head to perform a public recital, her supporters are thrown into a panic. It seems she has never really “heard” her own voice. (Indeed, how many of us truly know what we sound like? The first time we hear a playback of ourselves via a tape recorder is likely to be a startling, even dismaying experience.) So, when she first hears a playback of her singing on a phonograph record, she is so startled that she suffers a stroke.

Aiding, abetting, and protecting her from the nasty realities of her singing voice is her faithful butler, Madelbois. This Machiavellian presence does it all, quietly stage-managing behind the scenes her private recitals, photographing her in operatic costumes, and in general supporting the illusion of her artistry. It is a compelling performance by Denis Mpunga—in every respect as compelling—and artful—as that of Catherine Frot as Marguerite. In this wise, the movie reminds me of another movie about the discrepancies between Art and Artistry, Billy Wilder’s SUNSET BOULEVARD. Marguerite’s butler is to her as Erich von Stroheim’s chauffeur is to faded movie queen Gloria Swanson. In both cases it is the puppeteer who “performs” the puppet. And in both cases, there is a weird, rather discomfiting revelation that behind whatever we call Art is nothing but artifice and the frailty of the human heart. But that is enough. The French master Jean Renoir knew that. And this new film, MARGUERITE, enacts it in stunning fashion.
Posted by John C. Tibbetts at 11:14 AM